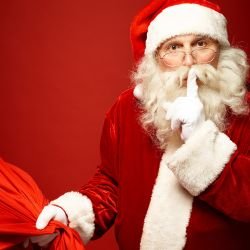 Child psychologist and writer Bruno Bettleheim tackles this question clearly: “We have to let our kids believe in Santa and other mystical characters because they add an emotional aspect to important concepts that they will develop later in life. We all know from experience that our ideas about Christmas evolved from Santa and the reindeers to the spirit of giving, from the joy of receiving gifts to the joy of offering some to others.”

Santa Clause, the Easter Bunny and the Tooth Fairy are not lies. They are fantasies that fuel the little ones’ imagination. The myth of Santa Claus is an expression of young children’s magical thinking. Look at preschoolers play together. They invent stories and play make-believe games. From the dragon to the princess, the firefighter to the sick baby, their games are always set in an imaginary world.

It’s only around 7 or 8 years old that children start making the transition to reality thanks to the development of concrete operational thinking, which gives access to logic. When a child puts a tooth under their pillow, goes on an egg hunt, makes a Christmas decoration or wishes for a particular toy for Christmas, they're learning about anticipation and time frames, and stimulating their creativity and imagination. They're getting ready for the celebrations. When they're drawing a Christmas card or making an ornament to offer as a gift, it means that they are now aware of the importance of generosity.

Martine studied clinical psychotherapy in 1995, earning a diploma from the Gestalt Intervention Centre of Montreal, followed by five years of practicing therapy in the city. She has accompanied people on the road to death, and has helped families affected by genetic illnesses or AIDS. Today, she works as a coach for a communications and marketing company, helping to recruit international experts for the European Commission in Brussels. She also has a private practice and greatly enjoys one-on-one time with her patients. For more info, email her at martine@taktic.eu or give her a call at +32-485-614-234.

This year’s Christmas magic fills your heart with childish joy but the sounds, the images and the smells make it even more substantial. Here are some suggestions to transform your home into a real Christmas wonderland…