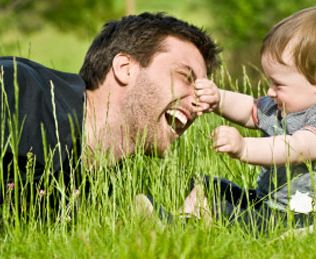 Fathers are sometimes present for the birth, but other times, they tend to lleave the mother alone to raise the child and deal with the hardships of growing up.

The father's image is crucial

From birth, a greater involvement in the child's general care will allow for a better father image. A father is the person who helps a child discover the world around him.

The father’s role is different from the mother’s, but it's complementary. Early on, fathers bring about a faster awakening, greater sociability and earlier control of language in their children… It's clear: mothers comfort, fathers stimulate.

Fathers help build their child’s personality and sense of independence, which is essential for an emotionally balanced lifestyle. They also help build self-confidence, which will be useful during competitive events in the future. Another role the father has to play is to help the mother accept that her child will grow up and leave her some day. This can be difficult since mothers usually tend to take over everything, but fathers who step up really make a difference, unless they're too busy with work.

Absent fathers or their marginalization can be harmful

An absent father can cause great unstableness to a child. Fathers may be absent because of professional reasons, death, sickness, lack of interest for the family life, non-recognition of the child, but most often, it is because of a legal decision related to a divorce or separation. 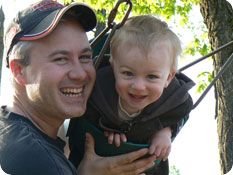 Picture taken from the picture-contest in June 2009

When parents separate, it is crucial that the father keeps his educational role no matter the circumstances. If the father passes away, other men in the family need to take responsibility. However, if the relationship with the father worsens, the child may feel insecure and may compensate by tightening the relationship with his mother. If you are unable to resolve the situation, the child may become stressed out and unstable. The ideal situation is for a father to encourage his child to surpass himself and to face him in acompetition. This process allows your child to become more independent.

To conclude, if the father's image is distorted, your child may develop personality problems in the future. He may become unstable, aggressive, very emotional, nervous, impulsive, withdrawn or over excited. In other words, the worries begin.

They don’t lose their charm when they become fathers! On the contrary, becoming dads seems to give them a little je-ne-sais-quoi! Don’t be shy, enjoy the pictures!