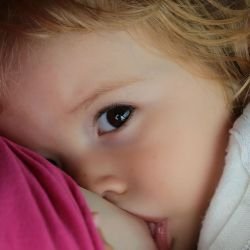 « I’ve been breastfeeding for a year and my breasts are a source of comfort for baby and a diet that I would qualify as... magical! Breastfeeding has finally made my breasts useful! Because before, they weren’t an erogenous zone for me. They finally have serve a purpose and my baby is fully taking advantage of it! And the fact that my body can produce milk makes me feel powerful and strong! »
Laurence

« Breasts are not only a source of desire, they’re also a necessity for our children. I think it’s important to be able need to make that difference. »
Kathy

« I find it a bit hard to consider them for anything other than breastfeeding. Maybe once I stop breastfeeding, it will come back. I'm not worried. »
Kim

« I’ve been breastfeeding for 4 months and I love it. It's rewarding and it gives me a very special and privileged contact with my daughter. However, although my boyfriend is really for breastfeeding, he also finds it really difficult because I no longer see my breasts as objects of desire. He loves my breasts and it saddens him, but I can’t help it. It’s as if right now, they’re only for my daughter and I don’t really want my boyfriend to touch them. I hope it will return to normal when I stop breastfeeding. »
Mélanie

Big or small, they’re mine!

There are as many different breasts as there are hairstyles. We sometimes want to change them, tone them or increase their size, but deep down, would it really make us happier? It’s hard to say.

"Every year, about 8,000 women in Quebec pay to have their dream breasts. A decision taken at their own risk, despite the ban of silicone implants. For new prostheses continue to cause concern. And while we're playing Russian roulette with women’s health, this global market is thriving!"

Over the years - and pregnancies - our breasts change. Their appearance often takes a hit. Pregnancies, weight gain, breastfeeding, and weight loss all have an impact on the appearance of our breasts. To be proud of our breasts without going under the knife, it’s sometimes as easy as choosing the right bra and opting for flattering clothes and necklines.

Fact or myth? More a question of taste! But it goes without saying that a shapely bust attracts more attention than a discreet one. An American researcher has studied the issue. His findings are astonishing.

Anthropologist Frank Marlowe, from Harvard University, has published a study on the subject. His hypothesis is that men see large breasts as a sign of good health, if they’re firm and big. Men see breasts and shapely hips as clear indicators that a woman is fertile, as her hormones have shaped the body of a potential mother. The man would instinctively react as a future father when he sees a beautiful woman, just as this woman would be impressed by a handsome man with broad shoulders and an athletic body. Source : Doctissimo

But wouldn’t the truth be that men like breasts… in general, no matter how they look? It’s hard to say. One at least suspects that breasts are seen as a sign of fertility, as had assumed Leonard Shlain, author of the book Sex, Time and Power: How Women's Sexuality Shaped Juman Evolution. His hypothesis was that, evolving from quadrupeds to bipeds, our buttocks have become less visible, unlike breasts that are now at eye level.

Before deciding to have a breast augmentation, you must first ask yourself why who want the procedure in the first place. Do you have good reasons?

When they start exercising again, several women wonder if being active can affect or even ruin their milk production.

Breastfeeding Problems and Solutions: What to Do When Your Breasts Never Feel Full

Breastfeeding is amazing! For starters, breastfeeding is the only way to give your baby the unique rich blend of nutrients and immune-boosting elements that provide life-enhancing benefits.

Be ready for winter

Winter is approaching and it's important to be prepared! Here are some tips and tricks mothers with experience want to share with you so you and baby can be well prepared!

Do you want to spoil your loved ones with a homemade gift this year? Here is a list of original homemade presents that will help you pamper your family and friends!