Should we mention language disorders or not?

In addition to information about the address, the name of the parents and the number to reach you in case of emergency, the school will want to know his medical history and the details of his development, including that of his language. Recently, a parent asked me if he should mention his child’s disorder during registration. He is not the first to ask and every time, I try to understand the reasons that make them reluctant.

Reasons to avoid talking about it

Some fear that the school will judge them or their child. The idea that a child developed a language disorder because of a lack of stimulation from his parents is still very common and it is not rare to hear parents confessing that they acted the wrong way or have been absent. Others mention that people around them say or imply that a language disorder is related to a lack of intelligence and don’t want anyone to question their child’s intellectual potential. One way or another, the fear of being judged by the school staff and of being labeled still exists. In other cases, I heard parents mention that their school wasn’t offering any services so they did not see any point in telling them about an eventual disorder. It would only result in labelling their child. And also, in some cases, it seems that some schools refused to offer speech therapy services in school, claiming that the child already had access to those at home.

Reasons to talk about it

No taboos
We cannot deny that some taboos still exist concerning speech disorders but I noticed a positive evolution over the years. It is increasingly admitted that not only parents but also children have a share of responsibility, through their potential and openness. Talking is a two players game and in that game, every player must cooperate. As parents, our role is to teach and the child’s role is to be able and to want to learn.

Thus, when noticing a delay or a language disorder, it is important to identify its cause, not to judge the child but to help him make progress. It is true that some attitudes of the parents may be better than others to help a child evolve. If such is the case, the school administration, that is not there to judge, should find a resource that could help the parents. If, for a reason or another, it is the child who is less skilled or receptive to learning, it is important to know it and react as soon as possible. All children should receive proper and good services to which they are entitled. 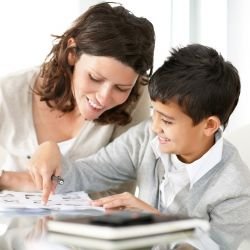 Early intervention
We cannot stress enough the importance of early detection to promote social integration and learning in young children. Young, the child learns the language and later, that language allows him to learn. In class, the information and instructions are given in sentences of varying length and sometimes include new words. The teacher may read stories that he must listen to and that require good listening and good understanding.

Even if it is still early in the school life of your child and without making it sound alarmist, it is important to know that a relation was established between school results and potential dropouts. Though early detection, it is possible to avoid the accumulation of delays that can result in a lack of interest in school and discouragement. In return, the child must express himself in various situations. He must say, explain, tell and he must master his language enough to do so in a way that will be easily understood by others.

Language development must meet the requirements of the curriculum. During registration, it is important to mention any known issue. However, if you wonder if his language is adequate and sufficient to start school in September, I suggest consulting the Appendix table found in my “Guide du langage de l’enfant de 0 à 6 ans”. You can also ask questions to the school staff: in some cases, the school may have the necessary resources or refer you to public or private services. 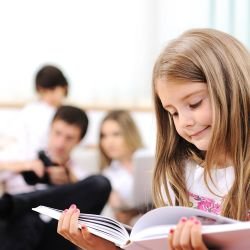 No guesswork for the teacher
A class is composed of about twenty children with different personalities, needs and skills. At the beginning of kindergarten, some will adapt easily while others will be more withdrawn. The teacher has to teach them but he must also understand their individual realities and try to see what could be an obstacle to learning. Identify children who have a disorder or a language delay may be slow or complicated in some situations if we don’t know anything about the general behaviour of the child outside of school. Some children may fit right in if they are smart enough to follow others and imitate them, even without understanding the instructions. Also, the short answers given by a child may be interpreted as shyness rather than a difficulty to speak. Talking about our doubts only helps the teacher and can speed up a process that might be necessary.

Get the appropriate and good services

If it is your first child, you may not know about the services offered by your school board. Without entering a political or social debate, it is important to know that every school board and possibly every school have different numbers of professionals and they all have varied and limited affectations. When reading editorials, watching certain news, we realize that the lack of those services is denounced by many parents whose children cannot receive the services they need.

But beautiful stories exist too and I know children whose follow-up helped them enjoy school, make progress and learn because their school offered them appropriate people, support and programs. So the only good advice I can give is to be aware of what could be offered to your child: what professionals are there? Does their role include detection, evaluation, follow-up or participating in exchanges to build a personalized intervention plan or to refer to a professional outside of school? Does the school board offer classes for children with special needs? When and under what conditions are children referred?

Speech therapists are the people specialized in language interventions. If in doubt, and if you think your child will not be ready for school, I suggest consulting Speech Therapy Montreal who will suggest resources in your area.