To VBAC or not to VBAC? 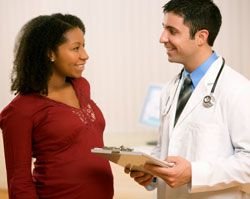 One of the more important risks associated with caesarean birth is the increased likelihood of placenta accreta (abnormal attachment of the placenta to the uterus) in future pregnancies. Placenta accreta is a serious obstetrical complication, and the risk increases with each subsequent C-section.

But vaginal delivery can also have risks. Operative vaginal deliveries – those that involve forceps or a vacuum – can have high complication rates, Dr. Akoury said.

Vaginal delivery can result in pelvic floor dysfunction, such as incontinence. Risk is higher for first-time mothers, those with large babies and those who have a prolonged second stage of labour.

For women attempting VBAC, risks include uterine rupture or tearing of their C-section scar. Compared to a successful VBAC, a failed VBAC attempt triples these risks, and more than doubles the risk of hysterectomy.

Dr. Akoury notes that uterine rupture is rare, and affects a small number of women.

In terms of risks to the baby, fetal death during labour is more frequent in VBAC, and so is oxygen deprivation, which can cause damage to the brain and central nervous system. Once again, Dr. Akoury noted that these are rare occurrences. The rate of neonatal deaths is similar for VBAC and caesarean births.

The overall caesarean rate continues to rise, which means more women will be making choices about attempting VBAC or having an elective C-section during a subsequent pregnancy. Information about the risks and benefits of both options will be critical for making these decisions.

Having fears about giving birth

We are seeing it everywhere on pregnancy discussion boards: more and more pregnant women are afraid of giving birth. We talk about this phenomenon and give you tips so you feel ready to give birth.

10 things to bring to the hospital for baby

You’re giving birth soon and you don’t really know what to pack for baby at the hospital? Here are 10 things to remember to bring to ensure optimum comfort and safety for your newborn!

Delivery methods: Finding the right way to give birth to your child

Giving birth in a hospital or giving birth at home? Natural or c-section? Today, women can put together a customized childbirth plan truly in sync with their personal needs.