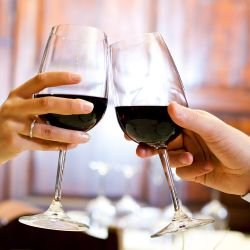 Since anniversaries are represented by simple elements, we can easily find an original and appropriate gift every year. A book, a ticket or a cuckoo clock for the first anniversary, bedding sets for the second, leather chairs for the third… You can find something to share, a night out, a trip or something for the house. You can also exchange gifts.

Since anniversaries celebrate YOUR couple, those of you who have specific passions can reinvent the list. Sports lovers can celebrate the wedding of skiing, parachute, kayak, hiking… Travellers can plan anniversaries of Vegas, Carcassonne, Mexico, Bora Bora… For their part, artists could celebrate a Pop Art or a Louvres anniversary. Finally, musicians could book a guitar workshop for the first anniversary and travel to Tokyo to see a Japanese pop music gig on the 10th, why not?

Other couples decide to renew their vows for various reasons. Some plan the wedding of their dreams, the one they could not afford the first time. Others love each other so much that they would say “I do!” over and over again and some want to show that they can still rely on each other after all this time. Renewing vows is gaining popularity and many options are available from Las Vegas to the French countryside.

The important thing is to have fun and remember how much you love each other. Once, I saw a couple celebrating their 54th anniversary and I caught the husband kissing his wife on the nose with a cheeky look. He said, laughing, “I can’t believe I was stuck with you for so long”. At that time, I realized that the simplest expression of love could be enough to remind your partner why you love her or him… until the next anniversary.

Did you know that in the Commonwealth realms, you can apply at the Governor-General’s office to receive a message from the monarch on your 60th, 65th and 70th wedding anniversaries?

He likes it a little, a lot, not at all…

Fortunately, all men are different and we wouldn’t like it any other way. However, it means that the knack of celebrating romantic traditions is not given to everyone.

Some men will forget about it and appreciate little reminders that will give them enough time to prepare something, other will hate those punctual marks of affection and, like at Valentine’s Day, they will find it grotesque to celebrate a love that should be obvious at all times. Maybe your husband has something planned and will be ready months in advance…

Pay attention because sometimes little attentions are enough to make the day perfect and if it is not enough for you, ask him out!

Fashion tips to survive a wedding during pregnancy

Whether you are the bride or the bridesmaid, being in late pregnancy shouldn’t stop you from being stunning and shining a thousand lights during this memorable event.

Has your boyfriend finally asked for your hand? Congratulations! Don't get anxious to plan the wedding of the year... we found some ideas for you!

Every year, almost 18,000 weddings are celebrated in the Greater Montreal area. Some are civilian, some are religious, some are small and some are big. Imagine the picture!

Is your child’s birthday just around the corner? Would you like to entertain his or her friends yourself? Here are a few free ideas to make it an awesome birthday to remember for a long time.