Fear of not loving the 2nd child as much...

Your baby is your biggest source of joy and you can’t imagine your life without him/her. You’re starting to think about extending your family, but you’re afraid... What if you don’t love your second baby as much?

You never imagined that it could be possible to love someone so much and so strongly until you became a mother. Nothing in life can compare to the love you feel for your child and the powerful desire to protect him or her.

However, women bond with their child at different times. Some feel like supermoms as soon as the pregnancy test comes back positive. Others feel the rush of love during pregnancy or after giving birth when they finally get to hold their precious little one. But it’s also possible to need a few days, weeks and even months after the baby is born to clearly establish the special bond. The mother-child bond is a complex process that just can’t be explained in words; it has to be experienced. Trying to find an accurate explanation to maternal love is hard. How can you define that feeling?

Even if we know that a mother’s heart is capable of loving many children, we sometimes have doubts. We may have plenty of examples around us of mothers with many children, but it's possible to still be worried, even if it's hard to admit. It’s not easy telling others “I’m afraid I won’t love my 2nd baby as much as my 1st born.” A mother shouldn’t have a favorite. A heart shouldn’t compare. We sometimes even start thinking that we should have never had kids at all – let alone a second one – if we have doubts about our ability to love. In short, it’s a never-ending thought in our head despite our friends and family’s attempts to reassure us.

We somehow believe that we will be the only mother on earth unable to double her love and to be completely indifferent to her second child. We think others will blame us for being a terrible mother and picture ourselves as such.

It’s actually only in our minds that these scenarios exist. Our heart knows that we’ll be able to do it, but we don’t hear it. Our rational side takes over our entire thought process. We eventually start to think that we might be up to the challenge and decide to try for a second baby, knowing all too well that it will bring on many more questions and anxieties.

When I was pregnant with my second child, I kept asking my friends who had gone through the experience before me if they ever felt those anxieties. During the first pregnancy, we tend to worry about weight gain, stretch marks, and risks of malformations. For the second pregnancy, we think about our future relationship with the baby and the impact his arrival will have on our tight-knit family. 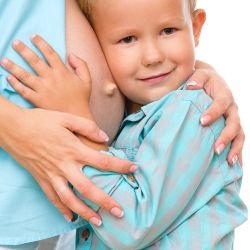 Evolution of a different kind of love

A typical worry in moms who have one child but aren’t sure about having a second one is that they would love their second child less because they are already so filled with joy and love from the first one. Moms also worry that the first child will be jealous of all the attention given to the new baby. Our fears are thus not only about not loving the second child for who he or she is and what they’ll be adding to our workload (diapers, feedings, purees, sleepless nights, etc), but also about feeling like we’re imposing this new baby to our first born. Some people say that having siblings is a gift for the first child. Maybe later, when they develop a relationship and complicity. But whatever we say, bringing a baby into the life of a child that had always had his or her parents to themselves is a big deal that will certainly unsettle them for a while.

If we have doubts about our ability to love a second child so much, it’s often because we’ve forgotten about an important variable: our time spent with our first baby. Think about it: you have known your first born for months, perhaps years. And you expect to feel as much love towards your second child right from the start? It’s impossible.

You’re pregnant again? Congratulations! Here are a few simple tricks to help you in your daily life.

The arrival of a baby doesn’t change who we are as individuals. But it changes our lifestyle and each family member must adapt to this newcomer in the family.

I want a baby!

Once the decision to have a baby has been taken, you hope that the process of trying to conceive will not last for ages. If you are lucky, you will soon know the joy of bearing a child.