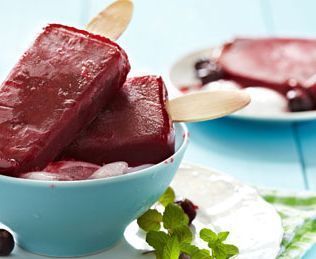 Pure fruit juice has its limits!

In fact, drinking too much juice often makes you neglect milk and water. Also, in excessive amounts, juice gives too much energy and not enough dietary fibres. Whether frozen or liquid, the maximum daily amount recommended is about 125ml (1/2 cup), the equivalent of one serving of fruits.

Serve fruits that have been frozen such as grapes of various colors (cut in quarters for toddlers), pieces of pineapple, mango cubes, etc. You can also use these fruits as ice cubes in a decorated glass of water. Another original way to serve them is to put melon pieces on a stick. You can also mix fruit purées and freeze them in Popsicle moulds. We suggest a frozen treat recipe with mashed pears and strawberries.

Preparing frozen fruits with your child can be a fun way to discover new fruits!

Nathalie Regimbal is a dietician-nutritionist and mother of 3 kids. She oversees Manger Futé, a team of people passionate about diet that empowers those who want to feed children healthily. To demystify nutrition and diet, Nathalie gives advice on the show La Cantine on Channel V. In addition to her collaboration with Mamanpourlavie.com, you can read her articles in several print and online magazines. Among others, she is a collaborator in nutrition for Yoopa and Célébrons magazines. To make meal time easier for families and initiate kids to cooking, Nathalie has worked hard to write inspiring books: the best-seller Du plaisir à bien manger… 80 recettes gagnantes pour les familles, and the Mandoline series of illustrated cook books for children, the latest one having just won the prestigious prize of the best French Healthy cooking book from the Gourmand World Cookbook Awards 2010. To help with meal preparation in daycare centres, the team of dieticians at Manger Futé offers classes and coaching. Manger Futé has also published the practical guides Élaborez rapidement un menu équilibré dans votre service de garde and Élaborez rapidement une politique alimentaire. Discover Nathalie Regimbal's books: Du plaisir à bien manger – 80 recettes gagnantes pour les familles Mandoline – J’ai ça dans le sang! Mandoline – Développe tes défenses naturelles!

Lunch box: be inspired every time!

Preparing a healthy lunch that kids will love is not always an easy task. This is why Nathalie Regimbal decided to reveal some of her secrets!

Your kids are not big fans of vegetables and you don’t know how to prepare them so that they will eat them? Here are 10 ways to prepare vegetables that are tasty for the whole family!

Love tastes so sweet but to spruce it up a bit on Valentine's day, you must change the recipe! Here are a few tips to make your Valentine’s dinner unforgettable.

You don’t have time to start making an elaborate dessert for the Holidays? Here are some ideas for quick recipes or ready desserts to serve at Christmas without guilt!