Knowing that your child is being bullied is very difficult to live with. Here’s what you can and should do if it happens to you. 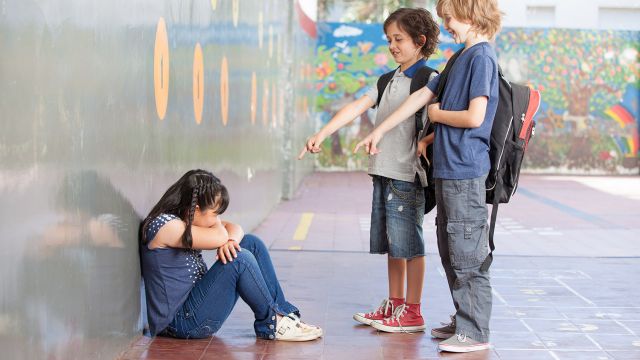 Bullying makes us feel awful and even when we know that our child is having a rough time at school, we don’t always know how to react. Here are a few tips to spot bullying and end it for good.

The new Anti-Bullying Act defines bullying as the severe or repeated use by one or more pupils of a written, verbal, electronic or other form of expression, a physical act or gesture or any combination of them if it is directed at another pupil and if it has the effect of or is reasonably intended to have the effect of, causing harm to another pupil. In Canada, 75% of children report being bullied at some point during their school years and 25% of children between 11 and 18 years old have experienced cyberbullying.1

Among the strategies used by bullies, we find:

Allergic children usually experience verbal violence. However, some troubling cases report children who actually threw food at allergic children! About 300,000 young Canadians under 18 suffer from food allergies. When exposed to allergens, these children can suffer from a reaction that could potentially be mortal. An anaphylactic reaction can occur in the minutes that follow but it can also occur a few hours later. The only way to prevent this type of reaction is to avoid the foods that trigger allergies, which becomes impossible when it gets thrown at them. To avoid a very dramatic situation, make sure that your child carries his EpiPen at all times. 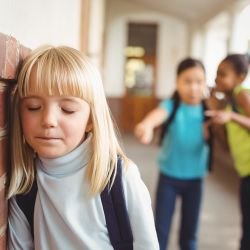 When you ask bullied teenagers what they would have done differently, they almost always regret not talking to an adult quicker. These children say that a problem that had been there for months was solved in minutes after talking to someone in charge, yet experts2 agree: children only talk to adults after they have tried everything else.

Children often fear being labelled tattletales and that fear makes them vulnerable to bullying. If they let people harass them out of fear, it will become normal for other kids to see them get humiliated. At that point, changing mentalities will become harder. That’s why you should act quickly!

Take matters into your own hands!

In chronological order, here’s how to react when your child is being bullied:

Several bullies avoid direct confrontations. If you put up a fight, chances are that he will stop being clever.