I want a one-of-a-kind man!

It is hard to separate your man into different parts. Do you love a man differently if he has experienced paternity by your side while you are also learning to become a mother? Probably. However, love cannot be reduced to such a restrictive definition. A woman can also fall in love head over heels with a man whose children will never call her mom, or with a man who will never be the father of her children.

During your teenage years, you spent endless hours dreaming about your future lover. He had all the qualities you could imagine: handsome, charming, caring, poetic, athletic, passionate, ambitious, generous... As you grew older, lovers came in and out of your life and with time, you learned how to define what you want a little better.

However, if you want to have a family, whether in the near future or in 15 years, new criteria must be added to the list. Your man’s heart will have to melt in front of a chubby baby. Your man won’t want to run away when your 18-month old nephew starts drooling all around your house with dirty hands. No, your man will get on his knees and play with the little guy! On the other half, if you wish to travel and have an exciting career, you have to look for a man who won’t be frightened by your fast-paced lifestyle.

I want some, he does not want any, we want some

“When I met my boyfriend, I was only 17 years old and he was almost 22. Yet it was clear in my heart and mind that I wanted four children. The man of my dreams had to be the father of my children, there was no doubt about it. 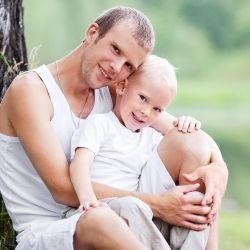 Unfortunately, the man of my life didn’t want children. But life had its own plans. I first got pregnant at 19 years old. It came as a terrible shock to my boyfriend and was a difficult time for our couple as well. However, with this first experience with paternity, my boyfriend came around and accepted the idea of having children. In fact, we started trying to have a second child. Our second little angel arrived four and a half years later. Afterwards, it was very clear for the two of us that our family was complete. Nevertheless, a third baby managed to make its nest before my boyfriend got a chance to get a vasectomy. Once again, it came as a huge shock to him and left our couple on a very slippery slope. Two months later, I had a miscarriage.

The idea of a doctor’s appointment for a vasectomy was always just around the corner and even though my partner did not want any more children, fear kept him from going. Surprisingly, I found myself getting pregnant again a year later. This time, the shock was not nearly as big as the previous time, and I would even say that my boyfriend was amazed by this third paternity experience.

Even if my boyfriend did not want any children in the beginning, he has given me love and support throughout all of my pregnancies. He never let me down and was always there for me. I even believe that witnessing the birth of his children has been one of the most precious moments of his life.

When I think about it, I tell myself that if life had not surprised us with these precious gifts, the man of my life would never have experienced the joys of paternity. The amazing thing is that my boyfriend is an outstanding father and an incomparable partner in life. I don’t regret that life gave him a little lesson because I know that in our older days, he’ll remember how he initially didn’t want children and then wonder how he could have ever lived without his three little girls.” 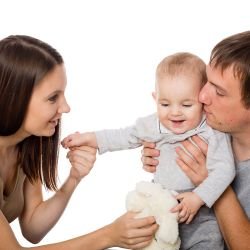 When you look at your “lover”, who do you see? The man of your life or the father of your children?

“I have always adored children and have always wanted a big family. When I met my boyfriend, we brought up the subject quite early on to make sure that we wanted the same things. After dating for only five months, I got a + sign on my pregnancy test. After thinking about it, we happily decided to keep our little surprise baby. My boyfriend may or may not remain the man of my life forever (who can predict the future?), but he will always be the father of my child. ”
Marie, Mamanpourlavie.com forum

“Eight years ago, I saw my spouse as a simple flirt, a purely physical attraction and nothing more. I would never have imagined that he would become the father of my children. As time passed and our passion kept growing, he became the man of my life. He is nothing less than wonderful. I love and respect him a great deal. He has his flaws that sometimes get the best of me, but his qualities always win me over. One day, we decided to have a family. We felt ready and knew that giving life to a child would be a wonderful gift for our couple. When our daughter was born, our couple became even stronger. Two years later, here I am, pregnant for the second time. He is my lover, my friend, the man of my life and an amazing dad to my daughter; he is all of that and I could not have found a better man.”
Mélanie, Mamanpourlavie.com forum

“My husband is first and foremost the man of my life. It was love at first sight and we were talking babies before we even started dating officially! I guess we just had to know if the other wanted children before starting a relationship. However, we both agreed that a couple has to be in love in order for the family to be a loving one. We would do everything in our power to remain in love for the rest of our lives. Wanting to show each other that we were ready to spend the rest of our lives together, we decided to get married last summer, when I was 5 months pregnant. It was important for us to be linked by marriage before starting a family. Now that little Victor is here, my man will forever be the father of my son. Yet, he still remains the man of my life before all else, and that is what makes him the best father in the world!
Mother of Victor, Mamanpourlavie.com forum

“My husband is without a doubt the man of my life. He is the most considerate man and is constantly helping me with our daughter. He really takes care of both of us. I knew from the start that he would be a great father (he wanted kids before I did), and he always had a way with kids. I don’t regret a single moment of the 9 years we have spent together and sincerely wish that our love will last forever. When you decide to have children with someone, it’s important to know if he is the man of your life and if he will always be there to support you. Your couple has to be rock solid when you start a family. Personally, I had no doubt about my man. He is an extraordinary lover and father!”
Mels, Mamanpourlavie.com forum

“He was a teenage love that became a very serious relationship. He was becoming the man of my life more and more every day! He is now my husband and the kindest father to our little girl and future children. He is and always will be the father of Laury and he is the man with whom I share a wonderful life, filled with love!”
Mother of Laury, Mamanpourlavie.com forum

Who do you see when you look at your lover? Participate and write your story in our forum! 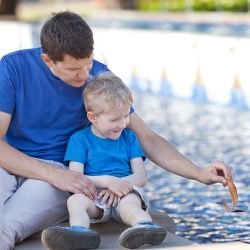 You are not born a father, You become one

In their twenties, many men haven’t yet discovered their paternal instincts, just like many women in fact! Some men – and women - have to succeed in other areas of their lives before starting a family. The key is not to find the absolute perfect man, but rather the man who shares your vision of life. Remember, men also search for an accomplished woman to be the woman of their life... with or without children!

If the maternal instinct doesn’t exist, then the paternal instinct doesn’t exist either. However, paternal involvement does exist! Being a father is not a supporting role based on preconceived ideas of strict education and supreme authority. The father no longer evolves in the mother’s shadow. Fathers play a fundamental role in their children’s development and blossoming. Now that mothers have regained their professional lives, even with children, it has given fathers the chance to really get involved in their children’s lives. Both parents must share a common vision of what family life should be like. Nowadays, fathers are much more involved, there is no doubt about it, and it certainly is for the better.

When you become parents, can you still be lovers? Being both is possible but how can we manage it through the routine when boredom kicks in?