The bond between a mother and her little girl is very strong, while father and son are a natural team. What about the opposite pairings?

Parents’ roles in developing both their sons and daughters’ personalities have changed considerably in recent decades. Bonds between fathers and sons, for example, have become more maternal due to mothers and fathers sharing the protective role that has solely defined fatherhood since the beginning of time—even if most dads would prefer to keep this role for themselves.

Author, psychologist and psychoanalyst, Louise Grenier has dissected the common features and differences between each type of relationship. 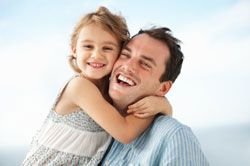 This paternal bond has something in common with the father-son relationship, according to Grenier.

“The father also helps his daughter detach from her mother, so that she will eventually meet other men,” Grenier says. The commonalities generally end there, though. A relationship between girls and their dads deviate from father-son relationships around 4–5 years old as they become conscious of sexual differences and their own femininity.

At that point, the father becomes less involved in his daughter’s activities—or, that is to say, he’s more involved in his son’s activities. (e.g. Mothers begin taking their daughters to ballet classes much more often, where as fathers take their sons to hockey.)

The relationship becomes more complex when daughters reach puberty. Some fathers detach from their daughters almost entirely, but most of the time, that sense of complicity remains. However, there is a lingering sense of prudishness around the fact that she’s becoming a woman, so this detachment takes any ambiguity out of the relationship.

Be ready for winter

Winter is approaching and it's important to be prepared! Here are some tips and tricks mothers with experience want to share with you so you and baby can be well prepared!

Do you want to spoil your loved ones with a homemade gift this year? Here is a list of original homemade presents that will help you pamper your family and friends!