Passion for reading: from father to son 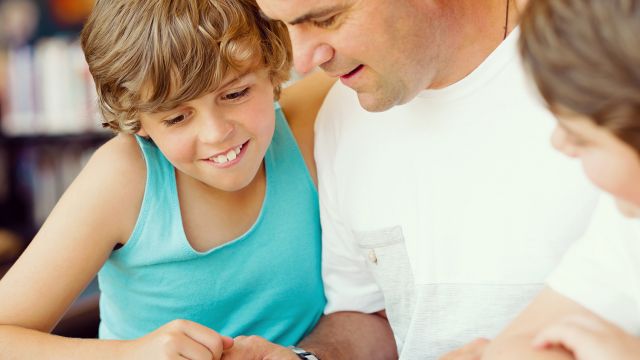 A study done in Quebec on the appreciation of reading and writing has shown that, contrary to popular belief, boys are not allergic to either one!

“Boys have very few male reading role models. The more competent they feel about reading, the more they will read”, explains Nathalie Lavoie, a Science of education professor at the University of Quebec in Rimouski (UQAR). With her colleague Jean-Yves Lévesque, she did an experiment on over thirty 9 to 13 year-old boys that were on the path of dropping out. The researchers tried to stimulate the boys’ interest for reading and writing. This action-research lasted 5 years and took place in three schools in the Bas-Saint-Laurent region. It proved to be very positive. Even if the number of students used for this research is relatively low, putting the emphasis on reading and writing reduced the number of children repeating grades (29.7% against 56.3% for the witness group) and joining an Individualized Paths for Learning program (15% against 48%).

Antoine, a 6th grader, didn’t read nor did he participate in any reading activities in class. A year later, he says that he reads everyday “to learn new words” even if he still prefers action books to novels. “We wanted to start from the child’s universe by offering him books that relate to his past experiences, offer male role models and that would expand his cultural universe”, explains Jean-Yves Lévesque. Most often, children with the most difficulty come from places where people around them don’t read. “Some have never even opened a newspaper”, says Jean-Yves.

The specialist in School failure and dropout prevention at UQAR finds it important to rely on every possible support, from comic books to movies. As a result, children can make a critical analysis of Garfield: book or movie, which version is the best?

Researchers also tried different tricks: creating a reading corner in the class, putting together a reading club, having discussions about articles written or read, giving writing assignments, and even inviting local artists and authors to come read to the class.

The second original aspect of this experiment was making sure that there was enough support for the boys: teachers, community, university, but mainly working in all aspects of the child’s environment, at school and at home. The biggest change was the evolution of the boys’ opinions on reading. “Reading is no longer a school activity, it is now done outside the school walls”, says Nathalie Lavoie.

This action-research’s goal was to increase boys’ school successes. It also eliminated the idea that “books are just for girls!”

How can we prevent the flat head syndrome?

When a newborn arrives in your house, a lot of questions arise. On of the major concerns for all parents is how to prevent the flat head syndrome.

Is he a good father?

When you think about the father of your child, you imagine a man you can rely on but who doesn’t get in the way. He would be a kind but strong man, someone modern and effective. But who is he really?

The role of fathers

In the past, mothers and fathers had specific roles and there was no way anyone could have acted against the norm.