To our dismay, children could sometimes watch TV all day, but we are also big fans of it and our favourite shows. We want to dose television viewing, but we’re also aware that it can be a life saver when it calms the kids down and gives us a little moment of peace and quiet.

Let’s be honest : television is not all bad. It can be educational as well as entertaining. And rightly so! The main problem is that it can sometimes be invasive. It’s up to us as parents to set some rules for television to have a place in our children’s lives - a place we choose- without taking all the place!

In fact, what if we just needed to find the right balance to enjoy the good side of television, without it causing an unhealthy dependency or becoming a source of conflict?

How to dose TV viewing? 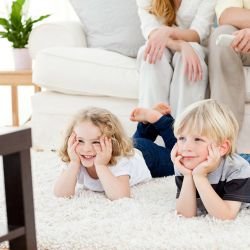 The good side of television for children

5 activities to get the kids moving

Are you looking for an original physical activity to practice with your child on weekends or during summer vacation? Here are 5 fun sports and activities the whole family will love!

7 days of activities with mommy

How could you use that bit of time between homework and bedtime? Here are fun, simple and quick activities to have fun all week.