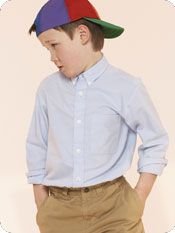 Zachary loves looking in closets and drawers. His parents have forbidden him to do this in certain rooms of the house, but have reserved a special drawer in the kitchen (filled with plastic containers) and a closet in his bedroom (filled with stuffed animals) just for him so he can empty them out and fill them back up as he pleases!

Sarah refuses to put on the clothes her mother has chosen for her, and it results in tantrums every morning. Her mother has started choosing the clothes with her the night before. Her mother lets her choose between two outfits. Sarah chooses the one she prefers and has to wear it the next day. Her mother has the difficult task of not budging and reminding her daughter that she chose the outfit.

Victor has tantrums in public when he wants knick-knacks. Now, his parents inform him before running errands that they will say no to knick-knacks, but that he will be able to choose the cereal box at the grocery store. With time, Victor will understand that what his parents decide is final, and the tantrums will slowly diminish.

What if he is already a little emperor?

If for one of the reasons mentioned above, your child has become a little emperor, know that not everything is lost! However, your child will have to go through a difficult aggressive and impulsive stage because he has never gone through it since all of his demands were instantly fulfilled by his parents. You will have to deal with a child who will throw tantrums and strongly oppose himself to the limits you are trying to install. By being convinced by the reasons that motivated you to change, your child will understand that you are doing this for his well-being and out of love of him.

Many community organizations offer workshops for parents who want to talk to specialists and other parents about subjects related to daily family life, discipline and child behaviours. Get more information by contacting your region’s CLSC.

Education-coup-de-fil can also be a great help for parents who are overwhelmed by their child’s behaviour. It is a free and anonymous service that provides professional counselling by telephone. In addition to online services, this organization offers workshops, conferences and coffee meetings on subjects related to parents’ concerns.