Toddlers under three years of age are most often affected and it usually results in parents suffering from sleepless nights while trying to relieve their child’s ear pain.

Most middle ear infections or otitis media are quite painful and include fever and a sore throat. A minority of ear infections can occur without any noticeable symptoms. Bacteria cause approximately 75 percent of middle ear infections whereas viruses cause 25 percent. Most commonly, theses pathogens invade the entire upper respiratory tract, including ears, nose and throat. The Eustachian tube, which plays a role in evacuating ear mucus into the throat, becomes swollen due inflammation. This causes a liquid build-up in the middle ear making it more prone to microbe proliferation.

Otitis media most often affects young children because their Eustachian tubes are shorter and more horizontal than those of adults. It allows bacteria and viruses to make their way into the middle ear more easily. In addition, children’s Eustachian tubes are narrower, making them prone to blockage. Approximately 60 % of children will have an ear infection before the age of 3, whereas less than 10% of children between the ages of 5 and 6 years old will suffer from this type of infection. This can be explained by the fact that, as we grow up, the Eustachian tubes become larger, allowing a better liquid circulation. 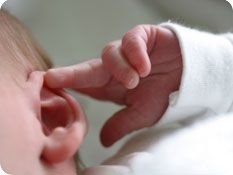 Your doctor can prescribe an antibiotic treatment which must be taken as directed until the end of the treatment. By interrupting your treatment, the infection will not heal properly and can reappear rapidly. Symptoms should lessen within 24 to 48 hours after having started the treatment. Make sure to book a follow up appointment at the doctor’s office two weeks later to verify if the infection has completely disappeared and the middle ear has properly healed.

Several studies demonstrate that bacteria have become growingly resistant to antibiotics. That is why doctors think twice before prescribing this type of medication for otitis media.

If your child has very few symptoms, no fever and if the eardrum is not bulging, he can be treated with analgesics (acetaminophen, ibuprofen) to treat his fever and discomfort.

Resistant bacteria are the cause of concern. If antibiotics do not have any effect on children, they will be left with only their immune system to fight infections, which may not always be enough. Even worse, resistant bacteria can spread worldwide and bring back diseases that have disappeared in the past.

Some may consider a less traditional approach to treat or prevent middle ear infections. However, it is crucial to always start with a thorough traditional examination in order to confirm the diagnosis before starting any other form of treatment. That being said, chiropractic practices as well as osteopathy have shown surprising results in certain cases. Homeopathy is also growing in popularity.

Otitis media is difficult to prevent since children often catch colds. However, by teaching your kids to wash their hands properly and frequently, you can help reduce their chances of having a viral infection. Furthermore, it is a known fact that cigarette smoke increases the risk of infection and that breastfeeding helps to increase your child’s resistance to different pathogens.

Did you know that using a bottle or a pacifier for a long time can cause otitis? There are many bad habits that can trigger an infection. When otitis is recurrent or when antibiotics are ineffective, some liquid can build up in the ear.

That liquid is usually drained out naturally but it may be necessary for a specialist (ENT) to insert a tube in your child’s ear. It is a short and efficient intervention. But we prefer to avoid it… if you know what I mean!

Second hand smoke is detrimental to the Eustachian tube and delays healing.

Make sure your child drinks a lot while suffering from a middle ear infection. If your child is older, you can give him sugar-free gum to chew. By swallowing frequently, the Eustachian tubes will get rid of excess liquid or mucus and it will help balance the pressure inside the ear.

Your child, the little fish, oozes out of the water with a throbbing pain in their ear. They probably developed swimmer’s ear and it should be treated immediately. It could also be prevented!

Everything you need to know about painkillers!

Pain medication and fever reducers are called analgesics or antipyretics. There are only two types of over-the-counter painkillers for children: acetaminophen and ibuprofen.