Your child, the little fish, oozes out of the water with a throbbing pain in their ear. They probably developed swimmer’s ear and it should be treated immediately. It could also be prevented!

Children are more prone to swimmer’s ear but mostly because they wade in pools in greater numbers than adults, said Dr. Yannick Larivee, otolaryngologist (ENT) and President of the Association of Oto-rhino-Laryngology and maxilla-facial surgery of Quebec.

Poorly maintained swimming pools, where the water quality is fair or poor, are the main culprits. The germs they contain can infect the ear canal and cause an inflammation.

This breeding ground for germs will be even more fertile if the ear contains too much wax, turning it into a moist environment, ideal for bacteria. “People who already have eczema in their ear are predisposed to swimmer’s ear”, adds Dr. Larivee.

The antibiotic drops that stop the infection and clean the ear are the main and most efficient treatment against swimmer’s ear. The treatment lasts between five and seven days.

The doctor may also perform an elaborate cleaning of the ear to maximize the effectiveness of the treatment. General practitioners, however, are not usually equipped to perform this ENT operation.

Some doctors and specialists also prescribe anti-inflammatory medication to ease the pain. 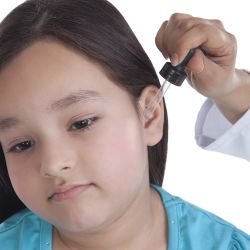 Good will doesn’t always compensate for what we don’t know and it can be difficult to completely rule out public pools, even if they can be a source of outbreak. So when we consider prevention, it is safer to bet on the “after swim”:

These two last recommendations, as well as the use of antiseptic ear drops such as Polysporin, are especially relevant for people who are prone to ear infections.

Prevention remains the best weapon against those pool-loving enemies says Dr. Larivee. “Ear infections are not more or less frequent over the years but the incidence of this type of infections doesn’t decrease either” It is not understood enough yet but prevention is the key to success…”

So bring your hairdryer to the public pool with your little baby fishes, even if you don’t intend to do your hair!

Some medications can be used if you are pregnant or breastfeeding but others should be avoided. Let’s take a look at the guidelines.