Sleeping in two different bedrooms when you’re a couple? Is that a sign that the relationship is doomed and that we are headed south? What if it was a way to reinvent ourselves?

Here are some reasons for sleeping in different bedrooms and some traps to avoid.

Mario and Caroline have been together for five years. They truly love each other but have decided, over a year ago, to sleep in separated bedrooms. When you hear them talk so tenderly about one another, you know that a lack of love isn’t responsible for their sleeping arrangement. What is it then?

“Our habits are completely different! I like to go to bed early, even more so since we had our daughter Mathilde two years ago. Mario likes to read in bed and hardly ever turns off the light before 1 am. Obviously, we don’t get up at the same time in the morning either. Having our own room solved the problem for us!” explains Caroline. The couple has sexual intercourse on a regular basis and sometimes sleep together, but for the most part, they are both glad to go back to their own space.

I’ve been with my husband for 25 years and we’ve slept in different rooms a few times. At one point during our marriage, it was to give ourselves a personal space. Then, we didn’t have enough space anymore so we went back to sleeping in the same room. We felt like it was a reunion. Last year, I started experiencing chronic insomnia because of the hormone changes that come with pre-menopause. My husband has also aged and snores louder and moves a lot more during his sleep. A year ago, we've decided to have our own rooms once again. Since then, my sleep has been a lot more stable. I have to admit that the pressure to sleep in the same bed is very intense. When people learn that we sleep in two different bedrooms, they usually give me a little sorry  smile and I hurry to tell them that it is not because we don’t love each other anymore… Even when people don’t ask why we decided to sleep this way, I offer an explanation. To be honest, I love having a big bed to myself and I don’t think I’ll be in a hurry to share it any time soon.
Sylvie-Ann 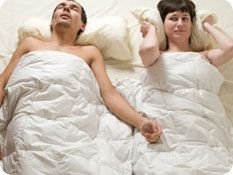 For Mark and Chelsea, sleeping in two different rooms has become a necessity! It’s a mutual understanding to avoid divorce! Like many men (and even women!), Mark snores really loudly as soon as he falls asleep which keeps Chelsea from falling asleep. “In the beginning, you deal with it, work around it and even find it funny! But at one point, this became a subject we would fight about all the time. I was irritable, tired and I was starting to blame him for every little thing”. It was their friends who recommended they sleep in different rooms. “Our first reaction, says Chelsea, was to refuse and say that we were way too in love to sleep in different beds…The idea finally worked its way through my head and after more sleepless nights, I convinced my husband to try it out”.

Sleeping in different beds would be the perfect solution for me but the pressure put on couples to sleep in the same bed is so intense that it's stopping me from giving it a try. Suffering from occasional insomnia, I sometimes end up sleeping alone. I don’t talk about it because I’m too afraid of being judged. Even my parents look at me in a funny way when I talk about it. That says a lot, doesn’t it? After a night alone, I feel better in the morning and transform into the patient mother and loving wife that I can be…and that my family wishes I was more often! I don’t think people have an open mind about this, which is too bad because I’m sure that many people would try it if it wasn't such a taboo. Trying it is only the first step!
Karine

A situation that almost always prevails without having discussed or wanted it is where you sleep with your child who has trouble sleeping. He then becomes accustomed to your presence to fall asleep and panics if you're not close by during his nocturnal awakenings. This is what happened to Sophie and Eric, who have been together for 10 years. “Nathan used to wake up at night when he was 18 months old. To reassure him, I would go and lay down in bed with him. Because I was exhausted myself, I would sometimes fall asleep with him. When he later became sick, I kept on sleeping with him to take care of him and watch over him. After 6 months, I realized that my boyfriend and I never slept together anymore! The temporary situation became permanent…”

Breastfeeding and its impact on sexuality

A growing proportion of mothers breastfeed their babies, and the virtues of breastfeeding are now well known. However, we rarely speak of its impact on sexuality.

Whether the big announcement was a big surprise or expected, when a woman gets pregnant, notable changes occur in a couple’s sexuality.

Sexuality changes during pregnancy, of course. And once the baby is born, you must also adjust. Sexologist Julie Pelletier evaluates the situation with us.