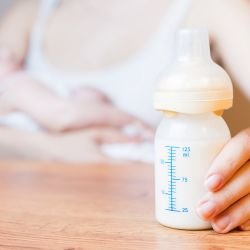 Mothers aren’t taught that breastfeeding doesn’t always go as planned. A baby can have difficulty suckling on the breast, milk production can be insufficient, or the mother can simply be too exhausted and decide to bottle-feed her baby to recharge her batteries a little. It is almost never said that using both techniques at the same time is possible. The message women hear is usually that “breastfeeding is a natural thing”, when in fact some mothers would like to say that “Breastfeeding is hard work”. But would they dare say it out loud? Even if they spend 20 hours a day breastfeeding?

“Although breastfeeding is important, it’s not really helping if it brings on health problems to the mother”, says Gaétane Tremblay. Many moms wait until they’re completely exhausted to switch to the bottle. Fathers are also in a difficult position. They take their role as supporter very seriously and don’t even think about asking their spouse if she needs a break, knowing how important breastfeeding is for them. They don’t suggest switching to the bottle because they don’t want to offend their spouse or make her feel guilty. Yet it’s often these men who have to make the mother of their child understand that bottle-feeding will be beneficial to both mommy and baby.

"There are many alternatives, but they are mostly seen as “if all else fails” options instead of real possibilities." The choices increase gradually: first choice is exclusive and on-demand breastfeeding. And if you’re not too good at it, you move on to the next choice, and then the next, until the last choice, which is not breastfeeding at all. Breastfeeding should not be seen as a competition or the only and best way to take care of a child. Like Tremblay says in the book, “better a happy and healthy bottle-feeding mommy than a stressed out and exhausted breastfeeding one.” The only thing that matters is that baby is healthy and happy.

From pressure to guilt to depression…

“The bigger the gap is between the ideal mother you would like to be and the real mom that you are, the bigger the risks of depression are. And the same goes to the gap between the dreamed about baby and the real baby”, says Gaétane Tremblay. This means that the risks of suffering from postpartum depression also exist during pregnancy especially if we think that we’ll need to perform at all costs in our new role as a mother. It’s a vicious circle. No one wants to be a bad mother. Making choices for herself, her baby and her family that are a bit different from the main social discourse doesn’t make her a bad mother. Not at all in fact! Making informed decisions means that the mother knows and respects herself, accepts that she can’t do everything by herself, understands that she has to give up some of the things she dreamed of to better adapt to her new life and acknowledges that she can make mistakes! And in the process, she is keeping the risks of depression away.

A mother with a very strong feeling of failure when she stops breastfeeding can have difficulty facing others and isolate herself. Staying alone when you’re going through a tough time is never a good idea. “Not being able to breastfeed is a big deal for mothers, and it’s another thing, among many, that could lead to depression”, notes Gaétane Tremblay.

Two great ways to keep the feeling of failure at bay

In front of disapproving stares and inappropriate comments from people who judge you for not breastfeeding, tell them that it’s a personal choice and that it is what is the best for both you and your baby. It may not be easy to say, but you have to know that you don’t owe anyone an explanation. Every mother makes her own choices. End of discussion!

Every woman has the Super Mom power, whether she breastfeeds or not. Being there for the child is what matters. From there, we all do our best. And in spite of all our efforts, some things will always remain out of our control. Some kids walk at 10 months, others at 16 months. Some are breastfed, others are bottle-fed. And in the end, none is better than the other.

Don’t compete with others in terms of how long you breastfed your baby. If someone acts that way and asks you the question, just use humor to put things perspective. "I’ve been taking care of my baby since they took their first breath.” After all, that’s what we all do.