Breastfeeding is the trend for celebrities in Hollywood! Not only do they proudly talk about the merits of breastfeeding but some even nurse in public! 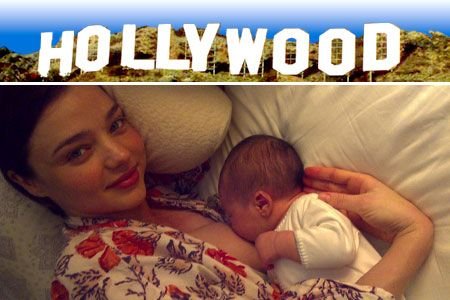 Miranda is a top model for Victoria’s Secret and is married to the handsome Orlando Bloom who is known for his role in The Lord of the Rings. A few hours after giving birth, she posted this picture on Twitter. Here is what she had to say about it:

« The photo was one of the first photos Orlando took. We both loved it and we wanted to share it. The pleasant surprise was that it also had the added benefit of promoting breastfeeding which to me is the most natural thing in the world and I love it. »

One of the best ways to get breastfeeding support is to work with a Lactation Consultant.

Dear Baby - Mommy Wants to Share Some Secrets with You

It’s past midnight. I’ve been standing by your crib, taking slow breaths so as to not wake you up. Watching every tiny movement you make, trying hard to relax. I tell myself that we are both doing ok.

How long should I breastfeed my baby?

The breastfeeding journey is different for every mother. Many things affect how long a mother should breastfeed her baby. What's important is to do what you think is right for yourself and your child.