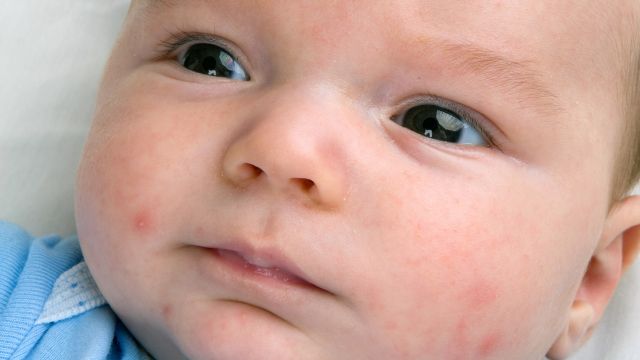 If you happen to spot a pimple on your baby’s face one day, don’t worry—your baby isn’t morphing into a teenager right before your very eyes. Your natural instinct may be to panic given that it seems very unnatural. You may, in fact, meticulously search every square inch of your baby’s skin for another pimple that may give you a clue as to what’s going on.

Fortunately, pimples, redness or irritation are nothing to fret about.

Most newborns also have a slightly bluish tinge to their skin at birth, but it quickly becomes pinker as soon as their fetal hearts invert the current of their blood flow. Skin works extremely closely with the brain. As a matter of fact, skin-to-skin contact between newborns and their parents, such as the kangaroo method, helps baby’s brains mature. The kangaroo method is often used with premature babies. 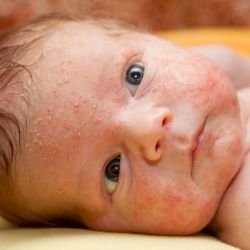 Eczema can pop up early on in a baby’s life, usually after just a few months, causing redness, painfully dry skin and extreme itching. Also known as “dermatitis,” eczema remains the most frequent skin disease and, more often than not, disappears at adolescence.

Atopic eczema (or atopic dermatitis) is the most frequent form and is purely an allergic reaction by the skin.

Dermatitis from physical contact is caused by any of a number of irritants (soap, sweat, saliva, ragweed, etc.).

Hives occur when the skin breaks out in what looks similar to bee stings and starts to itch. Little pink breakouts and red pimples may appear, disappear and then suddenly reappear. This can happen early in babies’ lives, especially with those who are allergic to proteins contained in milk.

To soothe the itching, add baking soda or some colloidal oat powder to your baby’s bathwater. In extreme cases, apply calamine lotion to prevent your baby from scratching him- or herself.

Around 20% of babies will be affected by baby’s acne. These white little pimples mostly appear on the baby’s face, showing themselves within the first couple of months after birth.

The main cause of these breakouts is due to an accumulation of subcutaneous fat in the baby’s pores. These breakouts cause a great amount of stress to many parents, who go from seeing their newborns with a smooth and soft face, to one with pimples no bigger than a needles head.

However, there is no magic trick here. These pimples will disappear on their own a month or two after the first breakout. Since their skin is already greasy, don't apply any oils, creams or Vaseline.

Although it is the body's largest organ, skin is often neglected. With the wind and cold temperatures that winter brings, it’s important to take care of it!