Depending on the tone, intensity, volume and rhythm of the baby’s crying, parents can understand the meaning of tears: frustration, fatigue, pain, hunger, joy, etc… Then comes the babbling and the repeating of syllables such as “ba” . By the age of 1, a child can say an average of 3 words, but understands much more, which is why it is important to speak to your baby. Parents sometime feel funny about talking to their baby constantly, but there is nothing ridiculous about it. “This is the traditional way of stimulating your child’s language so it can only be positive for his development. When you speak and your child pays attention to the noises you’re making, he will learn and start imitating those sounds and words”, explains Dr. Richard C. Woolfson in his book Small talk, from first gestures to simple sentences.

From the moment the baby is born, he tries to look at whoever is speaking, reacts to noises (especially sharp sounds), recognizes his parents' voices and is capable of differentiating low and high noises. Amazing for a newborn! The language learning adventure has just begun!

Ideal environment for learning how to speak

At what age do children start talking?

The first “real” words are usually spoken between 6 and 12 months of age. However, not every child is the same. Some keep it all “stored inside” and then explode suddenly. Even if he's not saying actual words, your child has been talking to you for a long time now... since he was born in fact! Listen carefully when your child speaks to you.
Here is a chart that sums up children’s language learning process. 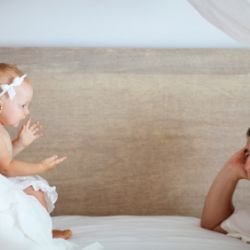 Can learning two languages at the same time confuse my child?

Rest assured: learning two languages simultaneously during your child’s first years cannot confuse him. Suggestion? Differentiate the languages as much as possible. For example, dad speaks English and mom speaks French. Hang on! The child’s progress may be slower at first. “You will realize that his vocabulary is very limited in both languages, his sentences are short and he's using less adjectives than most children his age” ,says Richard C. Woolfson in his bookt Small talk, from first gestures to simple sentences. Furthermore, studies have shown that children who are bilingual before the age of 5 have a better grammar comprehension later on in life. “By understanding that there are two words to describe every object, the child will discover that defining words is very complex.” Early bilingualism is a great introduction to the world!

My child lisps. Should I be worried?

This speech impediment will disappear by itself. Your 3-year-old won’t even understand if you try to explain the problem to him. He won’t even realize that he's lisping.

The “s” and “z” sounds only get differentiated by the age of 3 or 4, but some kids will speak from the tip of their tongue until they go to grade school. Some kids may even have difficulty pronouncing sounds like “ch” and “j”. Other sounds are harder to make, like the French “r” in French words such as: Train, Bravo, gros, etc…).

Talking is a physical thing! To be able to speak, the child must have control over certain muscles and the movement of the air passing through the lungs, pharynx, nose and mouth. All this to allow him to make different noises. 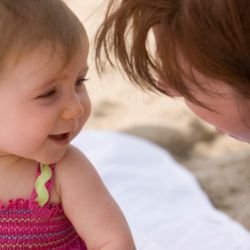 Talking to your baby: Yes!
Babytalk: No!

The importance in talking to your baby is undeniable. However, some parents talk like babies when talking to their child. We're not talking about doing mimics, exaggerating certain sounds or putting rhythm in your phrases. When we say “babytalk” we mean saying “tchou tchou” instead of train and “miaou miaou” instead of cat – instead of teaching them the real words. Even if your child has a hard time saying certain words when he's learning how to speak (saying fower instead of flower, fiend instead of friend) we highly advise against using the “babytalk” method.

When parents speak like their babies, the little ones continueto think that it's the correct way to pronounce these words. It is better to name things correctly instead of using a short-cut. However, expect to hear many little funny words that will turn into word games and be a lot of fun. You don’t have to correct your child every time he makes a mistake but just repeat the word over again and try to say it as best you can.