However, this ability fades by the time they reach the age of eight months unless they are familiar with the languages tested.

“In auditory studies, they’ve shown that, at birth, babies can tell apart the sounds from all the world’s languages and then over the first year of life, they lose sensitivity to sounds that aren’t part of their mother tongue,” said lead study author Whitney Marie Weikum. “I wanted to see if it was similar for visual clues.”

Her study clearly showed that it is. She found that babies can distinguish between languages visually until they are six months old. Bilingual babies are even more capable in that they visually discern their two native languages.

To determine that babies use visual clues, researchers set up silent video clips of three bilingual speakers reciting sentences from The Little Prince in French and English. Babies would sit on a parent’s lap in front of a 27-inch television screen hooked up to a computer. The parents wore dark sunglasses to prevent them from seeing the screen and influencing their child. Each trial consisted of multiple clips presented to the infant for a maximum of 16 seconds. When the baby looked away, an experimenter watching the baby’s face via closed-circuit camera would press a key.

Digital video analysis verified experimenters’ response times. It was assumed that if babies looked at a clip for a longer-than-average period, it was because they noticed the language change. Babies in the control groups would see the same people speaking a single language. Babies in the experimental groups saw the same people using both languages. Researchers then averaged the test times and compared them with the times babies stared at clips in the control and experimental groups.

They tested 96 infants, 24 of whom were exposed to a second language (French) at least 25 % of the time. The others were exposed only to English. Tests were conducted on three groups:  4-, 6- and 8-month-old babies. 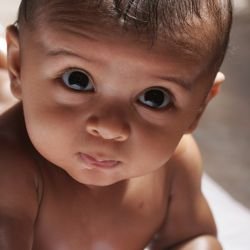 To see if babies could visually distinguish their native English from the rhythmically different French, the researchers showed the same people saying different sentences. They found that at 4 and 6 months of age, the experimental group of infants looked significantly longer at clips when the languages switched. By 8 months of age, however, the babies in monolingual environments no longer noticed the switch, while those in bilingual environments continued to be able to tell the difference. “It shows that babies’ abilities match their language environments,” says Weikum.

“This study is very important for two reasons,” says Dr. Fred Genesee, a specialist in bilingual research and a professor at McGill University. “It adds scientific evidence that infants have extremely powerful processing capacities that facilitate the challenge of learning languages. It is widely believed that dual language exposure is not simply a challenge, but a burden for infants and can slow down and perhaps even impede normal development. This study shows that this perception underestimates infants’ learning capacity. The additional stimulation serves to maintain infants’ discrimination ability beyond those of monolingual children; this, in turn, lays the foundation for simultaneous bilingual acquisition.”

10 things to avoid with your baby

Some things that seem inoffensive are cons-indicated for babies and toddlers. Here are 10 things to avoid while taking care of a baby.

Amidst the chaos that is COVID-19, schools are shut down and children's education is up in the air. Parents are looking for original ideas to fuel their children's thirst for learning, and Babbel has the solution!

Unknown father, absent father, anonymous father: what are the emotional and legal consequences when the father does not appear on the birth certificate?

Are you giving birth soon? Do you want to make sure you and your home are ready for the arrival of your baby? Here is a list of essentials to assist you in your daily routine with your new baby.