A few generations ago, all women had to get out of their isolation was to get out on their balcony and strike up a conversation with a neighbor. A clothesline culture, we might say! Putting their clothes on the clothesline became an excuse to have a conversation, let some steam out, gossip or take a break from their roles as mothers. Nowadays, mothers face a wall of silence when they go out on their balcony. The neighbors are busy and don’t talk to each other anymore. They’re either at work or busy in their homes. The neighborhood is strangely quiet.

Mothers are often very lonely. A Great Britain survey published in Mother & Baby magazine revealed that 2 out of 3 mothers lived far from their immediate family and that 53% of them felt “alone and isolated”. Furthermore, 9 out of 10 new mothers miss the social life they had before having a baby, and two-thirds of women felt “cut from normal life”.

More surprising data came out of this survey, while clearly showing the mothers’ loneliness. Indeed, only 10% of women have a relationship with their neighbors. Nearly half of the 2,000 respondents admitted that they had never really talked to their neighbors. A third of these women admitted to being on the edge of tears and 20% felt that they couldn’t talk to anyone.

Gone are the days of good old neighboring. Nowadays, the world is virtual! And that's good! The Internet is the new meeting and sharing place, in addition to being a mega information hub. A fear at 2 a.m., a question that bothers you or a need to share? Nothing could be easier. In two clicks – sometimes less – you can find the information you’re looking for, and often even more. You can find everything on the web. News, tips, forms, shopping, and most of all, new friends.

The Internet is the 21st century’s clothesline. The Web 2.0 is where it’s all happening. That’s where we share simultaneously with thousands of people. The wave is so strong that an American study revealed that 36% of women would choose their social networks over chocolate, shoes, and their mother-in-law! 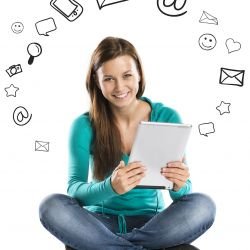 The web to the rescue

In this individualistic culture in which if we don’t even know our neighbours, we obviously wouldn’t dare disturb others. As new mothers, we quickly find ourselves isolated, even in a big city. We had promised ourselves that we would go out every day, take at least 2 classes and see our old colleagues regularly. Too often, we end up postponing these appointments. Too far. Too tired. Too everything. But at the same time, we don’t want to be alone. That’s where the Internet becomes our window to the world. It’s no wonder that women have immersed themselves in social media so much, and more intensively on Twitter, Facebook, Pinterest, Instagram, Classmates.com, and Flickr.

My friends are your friends!

An article that appeared on CNN.com revealed that women were more prone to becoming Internet addicts. Okay. Probably. Certainly even. We spend months at home after giving birth. Even with the strongest will and a complete devotion, we quickly feel the need to talk to others. To release the pressure. To vent. To keep in touch with colleagues and harder-to-reach friends. To stay in the game. To be informed. To find reassurance. To escape their daily routine as well as to share it with people like us. Addicts? Okay. Maybe.

The 10 best iPad and iPhone applications for moms

There are a lot of amusing or extremely practical apps available on the market for moms and future moms. We have compiled a list of our favorites compatible with iPod, iPad and iPhone!

You have hundreds of followers, you are huge on Facebook and you Instagram everything that you see. Here are 10 perfect gifts for you or for your friend who does.

Looking for a new job ? Being active on social networks is a great way to be seen, as long as you take good care of your e-reputation!