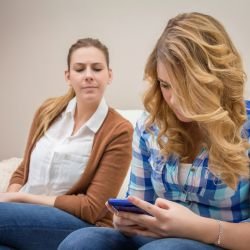 Even before you accept to grant your teen a phone, it is important to gauge whether or not his sense of responsibility is sufficiently developed to use this precious object properly. We can first determine the maximum amount we would like to dedicate (“we”, here, refers to the parents!). Our Option Consommateur consultant recommends starting with a cheaper phone while opting for a prepaid card package to ensure a better control over the costs.

You must also define the parameters of use: will he be allowed to carry it around all day long including at school (some schools prohibit cell phones), during his homework, at night even? “You can evaluate the needs of your teens and his habits for a few months” suggests Mrs. Chagnon.Don’t forget the Internet traps either, reminds Jeff Gagnon. Your teen must be aware of the fact that all information or data sent over the Web remains indefinitely on the Web.

Parental efforts and supervision sometimes have to face sales techniques in the boutiques says Mrs. Chagnon. Salesmen only partially reveal the information inherent to the User Agreement. Thus, as revealed in a study led by Option consommateur in 2007 that was presented to Canada’s Office of Consumer Affairs, only 19.5% of the sellers asked the young “ghost” buyers if they expected to use their phone often and for long calls and only six of them explained the difference between a service “pay as you go” and a package…

This is a strong argument for parents to give their child a “carefully read your contracts” lesson!

Advertising also has its share of responsibility in the youth addiction to mobile phones, admits Mrs. Chagnon, even if the law does not allow advertisers to target people aged 13 and under. “We cannot protect children against advertising, we must rather educate them so they are capable of evaluating the information as reasonably as possible”, she adds.