Too cool for school: The advantages of school uniforms for your child

Uniforms aren’t just for private school students anymore – more and more public schools are choosing to adopt them. We’ll help you shop for the right one. 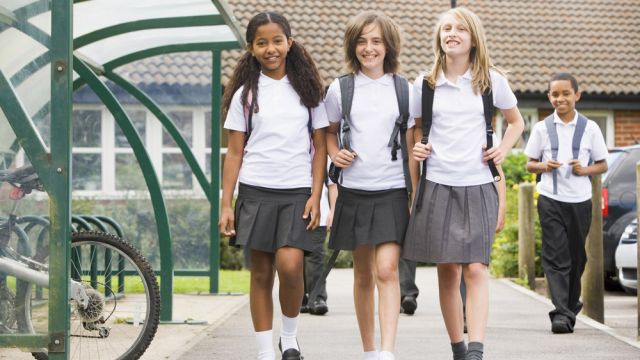 For children who, for one reason or another, don’t have as wide a selection of clothes and colours to choose from, though, wearing a school uniform may have more advantages than we initially suspect.

“Today’s fashion changes so fast, it's hard for parents to keep up with all the new trends,” Hattem explains. “With uniforms, this problem is essentially eliminated because it remains the same from year to year.” The clothes are also made to be durable, so parents can save in the long run.

Durability aside, school uniforms bring a sense of belonging to our youth, according to Hattem: “Kids develop a sense of belonging to their school and to their peers, which, in turn, creates a sense of pride. This is beneficial for everyone, as it helps eliminate differences in social classes that can lead to discrimination based on style. Kids also no longer have to spend so long in the morning trying to decide what to wear.”

Schools that have made the switch also tend to support the theory that uniforms carry benefits. Children in uniforms can be more easily found on day trips and school trespassers are unable to blend in—all things that make the work of teachers and supervisors easier and safer. 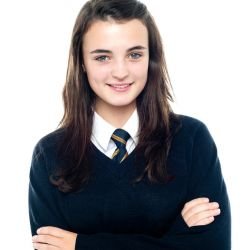 Sure, in the past, wearing a school uniform was synonymous with oppression. The rigid and often shapeless uniforms were designed to standardize all students and undercut the ability to showcase individuality and personality.

Today, however, even though some kids still consider the school uniform a massive hit to their egos, more and more kids are changing their perceptions. Hattem confirms that today’s school uniforms are far removed from those of the past.

“It's a phenomenon that has begun in recent years with TV shows like Gossip Girl showing a glamorous side to the school uniform, making it trendy,” she explains. “We even see the trend in boutiques—plaid, blouses and ties are back in fashion and, as a company, it's important to focus our energy and follow the trends. That means making a uniform that’s fashionable, stylish and cut in a way that young people will want to wear it.

“At StoneLizard, that meant partnering with Eve Gravel, renowned Quebec designer, to infuse a modern and fashionable touch to our clothes, which will further help to change perceptions towards the school uniform.”

What about the price tag?

It used to be quite expensive to buy school uniforms because a single company had a monopoly over it. Much has changed nowadays with new businesses wanting to do things differently and with attitudes generally evolving over time.

“Prices were exaggerated before,” Hattem says. “Now, parents can expect to pay between $15–20 for a polo or a shirt and between $29–35 for pants or skirts. It’s much more reasonable, and even less expensive, when you realize that the clothes are durable, the quality is excellent and children can wear the uniform year after year before passing it on to their younger siblings.”

According to Hattem, the basic kit for the first-years should comprise at least three or four tops, one or two warm sweaters, and three or four pants or skirts. Complete the wardrobe in the following years according to your child’s needs.

Getting involved in school

Your child started school and you believe that you should get involved in this organization that is now part of your life. Here are some ways to get involved.

How kids adapt to starting school

Your baby's all grown up and starting kindergarten. You're proud, but you also notice that they have started developing some unsettling behaviours. Keep reading to learn more about how kids adjust to school and peer influences!

Cold, hot, hot, cold, hot ... between two seasons, mercury plays yoyo with the weater and our patience! You never know how to dress your children: it's a real headache! So here are our clever tips to be better prepared.