Twice the happiness or twice the nausea? Twice the joy or twice the anxiety? Expecting twins is a very different adventure than expecting only one baby. 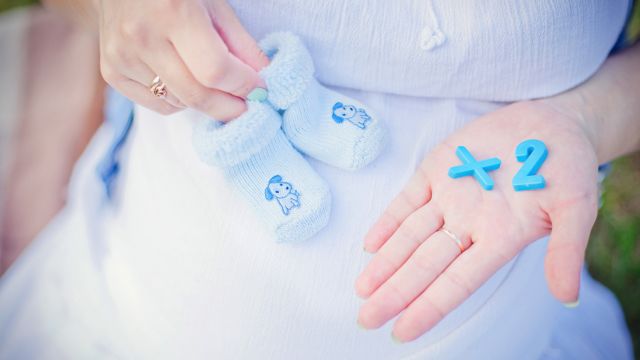 There are two little roommates in your uterus. A multiple pregnancy is different from a single one and is often a more “at risk” type of pregnancy because both fetus’ development have to be monitored. That being said, with a closer monitoring, complications are often avoided and the pregnancy is progresses without worries.

Carrying two babies increases the general fatigue of the mother, who gains more weight – and often more rapidly – than other future moms. “I gained 75 pounds in 30 weeks”, remembers Julie. “I put on 100 pounds in 7 months”, says another Julie. “When they did my C-section, I had gained a total of 60 pounds. Three weeks later, I could fit in my jeans easily and didn’t even have stretch marks!”, notes Anick. Walking around with a big belly brings about other complications (circulation problems, back pain, etc.). These discomforts are very common. “I had twins, a boy and a girl, and it all went really well. It’s wasn’t different from my single pregnancy, except that it got really heavy by the end and my son was positioned very low, which caused a lot of discomfort”, remembers Elaine. Because the uterus grows faster during a twin pregnancy, all the problems related to the pressure it creates – like the need to pee more often – occur earlier and in a stronger way. Some women also have difficulty breathing or get out of breath faster.

It is often recommended that women expecting twins rest more. Fatigue or even just going for a walk can lead to early labor. In fact, the closer monitoring is set up to avoid premature births, one of twin pregnancies’ major risks. Some doctors require more ultrasounds (perhaps monthly) to properly monitor the development of babies and detect developmental problems, worrisome positioning or other complications. 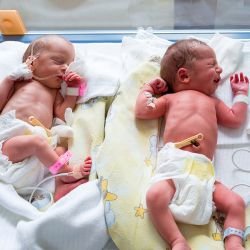 In terms of nausea and reflux, there is no explicit data. A multiple pregnancy doesn’t necessarily bring on multiple discomforts. It varies from one woman to another, no matter how many babies she is carrying. “When I was pregnant with my son, born at term at 10.7 pounds, it was a lot more difficult than when I was pregnant with my twin girls”, explains Sonia. She says that even if her girls deciced to show up at 33 weeks, everything went really well. “My identical twins were born in 2004 and my pregnancy went smoothly. I had regular appointments with my gynaecologist and had an ultrasound at every visit. When I started having contractions, my doctor tried to stop them but nothing worked. They weighed 4.4 pounds and 4.5 pounds, and one of them needed oxygen for 5 days. We spent 3 weeks in the hospital, waiting for them to gain weight. They are now 6 years old and in perfect health.”

Monozygotic :  the fertilization of one egg by one sperm which splits after fertilization and results in two babies being formed. Each twin develops from the identical half of one fertilized egg.  They are also known as identical twins.

Dizygotic: Two eggs are fertilized by two sperms. These twins may or may not look alike and really only are two siblings who share the same uterine growing space. They are also known as fraternal twins.

10 ways to announce your pregnancy

You took a pregnancy test (maybe even two!) and it is confirmed, you are pregnant! Congratulations! Now, how will you announce your pregnancy to daddy and the others?

Because that beautiful belly deserves to be highlighted and what better way than with a personalized t-shirt with a touching or humorous message or picture!

Getting ready for your pregnancy

It’s time! You're ready to embark on the great adventure of maternity and discover the joys of being a mother! Here are some useful tips to help you be better prepared.