In the field of paediatrics, the term “flat head syndrome” is used to define an asymmetry of the newborn’s skull. That’s what we call plagiocephaly. 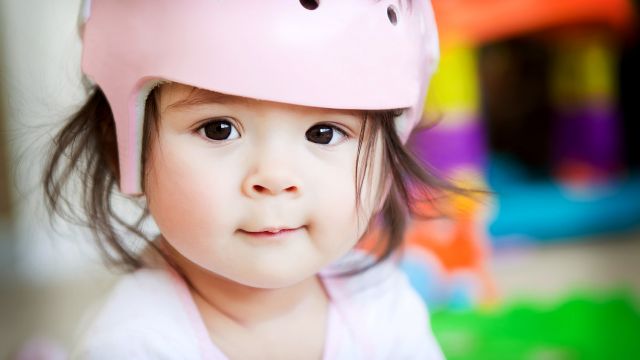 The term “flat head syndrome” is most commonly used to define the asymmetry of the skull of a newborn. We also use the term plagiocephaly to specifically name malformations of the baby’s head. The Greek terms “plagios” & “kephale”, mean oblique & head1.

In clinical practice, a malformation or flattening of the skull is observed by parents or diagnosed by doctors or other specialists around the age of 2 to 3 months2 despite the fact that asymmetries could have already been formed at birth. A diagnosis of plagiocephaly is established by evaluating six references of the anatomy of a baby’s head3. Depending on the severity of the plagiocephaly at least four asymmetries of the skull are easily identified.

There seems to be more cases of plagiocephaly in boys, possibly because the diameter of a boy’s head is bigger than that of a girl6.

The causes of plagiocephaly

The causes of malformation of a newborn’s skull are related to many circumstances that are linked to each other and that can occur before, during and after birth. The position of the child's body and the position of his head in the uterus during the last weeks of pregnancy can already cause a flattening or distortion of the overall volume of the baby's skull. Pressure on the baby's head during his passage through the pelvis of his mother during childbirth and instruments of birth (forceps or vacuum) can also cause cranial asymmetries. A torticollis that limits the rotation of the newborn’s head may also contribute to flattening and deforming the head in its overall volume.

However, the factor that is most often connected to plagiocephaly or the most aggravating is the sleeping position of the newborn7. While his sleeping position aggravates plagiocephaly, it does not explain its appearance8. Most clinical research are now linking the increase in cases of plagiocephaly of the past 10 years and the “Back to sleep” campaign of the American Society of Pediatrics. Since 1992, this campaign has been recommending that parents place the newborn on their back to reduce the risk of sudden infant death9.

Scientific clinical data has evaluated between 13% and 40% the risk for newborn babies under the age of twelve months old to be diagnosed with mild, moderate or severe plagiocephaly10.

The nature of treatments to correct skull malformations has evolved in the past years. From a total absence of treatment, it has evolved to approaches such as cranial and facial surgery, physiotherapy, helmets, positioning tips and osteopathy combined with these approaches11.

In paediatric communities and clinical research, a precocious treatment of plagiocephaly is recognized as key. However, although the importance of beginning treatment early has been demonstrated12, it has been observed that parents and doctors alike sometimes wait for the situation to improve by itself13. The spontaneous or progressive remodelling of the head, in several cases, does not happen14 and delaying the procedure can limit the potential treatment and can increase their severity in absence of intervention.

The arrival of a newborn comes with many questions. One that comes back often is whether or not we should put our baby on their belly.

How can we prevent the flat head syndrome?

When a newborn arrives in your house, a lot of questions arise. On of the major concerns for all parents is how to prevent the flat head syndrome.