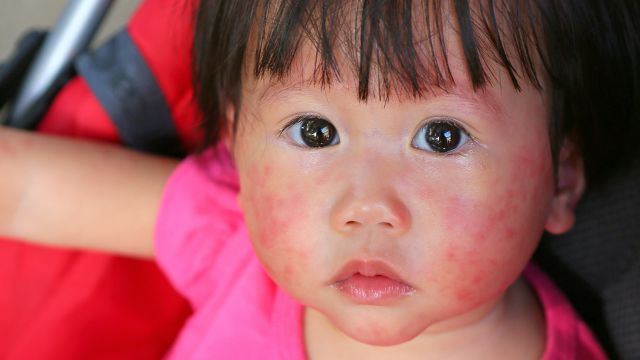 The 5th disease is caused by a virus named Parvovirus B19.

The 5th disease occurs most commonly in children with up to 70% of all cases occurring in children 5 to 15 years old. The virus is most commonly spread by inhaling air containing the virus after an infected person has coughed or sneezed, or by sharing cups and eating utensils. Once the rash is present, the disease is not contagious anymore.

The incubation period (the time between infection and the onset of symptoms) for 5th disease ranges from 4 to 28 days, with the average being 16 to 17 days. 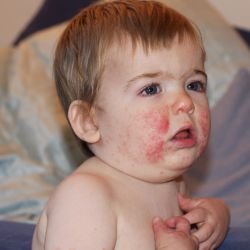 5th disease begins with a low-grade fever, headache, and mild cold-like symptoms (a stuffy or runny nose). These symptoms pass, and a rash appears a few days later. The bright red rash typically begins on the face. Several days later, the rash spreads and red blotches (usually lighter in color) extend down to the trunk, arms, and legs. The rash usually spares the palms of the hands and soles of the feet. As the centers of the blotches begin to clear, the rash takes on a lacy net-like appearance. Kids younger than 10 years old are most likely to get the rash.

Older kids and adults sometimes complain that the rash itches, but most children with a rash caused by 5th disease do not look sick and no longer have fever. It may take 1 to 3 weeks for the rash to completely clear, and during that time it may seem to worsen until it finally fades away entirely.

During the weeks following the disease, redness may appear again after stressful events, sun exposure, warm baths,friction or exercise.

Although antiviral medicines do exist, there are currently none available that will treat 5th disease. In most cases, this is such a mild illness that no medicine is necessary.Kids with fifth disease usually feel fairly well and need little home treatment other than rest. If your child has itching from the rash, ask the doctor for advice about relieving discomfort. The doctor may also recommend acetaminophen for fever or joint pain.

There are no specific treatments for 5th disease. Make sure the child is well hydrated by giving him lots of liquid and use the recommended amount of acetaminophen to ease the fever and the muscle aches. In case of itching, give the child lukewarm baths with baking soda or Aveeno, which you can purchase in any drugstore.

There is no vaccine for 5th disease. However, once you're infected with the virus, you're immune against future infections.. It is believed that 50% of adults are not immuned to the disease.

5th disease may cause problems for the fetus, who may develop severe anemia if the mother is infected while pregnan, especially if the infection occurs during the first half of the pregnancy. In some cases, this anemia is so severe that the fetus doesn't survive. Fortunately, about half of all pregnant women are immune from having had a previous infection with parvovirus. Serious problems occur in less than 5% of women who become infected during pregnancy.When a pregnant woman is exposed to 5th disease, she must consult her doctor immediately.

This article does not replace medical advice in any way, shape or form. It is presented to you as general information only.

Your groggy teenager whines and drags his feet more than usual. He complains about a sore throat. You suspected mononucleosis and the doctor just confirmed that you were right.