If your first baby is less than one year old, you are about to experience your first Christmas as a mom. And believe us, it will be quite an experience. 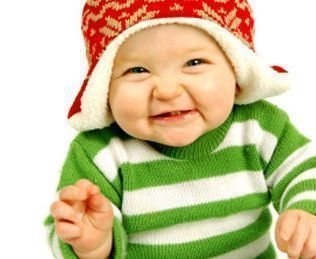 We came of age in our own way, carrying our family traditions and values. While some have fond memories of their childhood Christmases, others mention this time of year with some scepticism. But the excitement of spending a first Christmas with our child is the same for everyone. Either you want him to experience the magic of your own childhood or you swear that your child will have better Christmases than you had. In both cases, having a child will brings you back to a world of emotions that will make it seem like everything is possible!

Christmases of my childhood

At home, Christmas was more exciting to wait for than it was on the big night. I can see myself lying under the illuminated tree, year after year, full of hope, dreaming of dolls, coveting the best gift of all: the affection of my mother who would hold me in her arms, the same arms that usually hit me more than they hugged me. I was humming my favorite song (the promise that I made, I always kept. My father and my mother, I always respected. Don’t forget about me Santa. Don’t leave me with a broken heart…) I waited in vain but I never lost faith in the magic of Christmas! Like I never stopped believing in Santa or, more precisely, in the unconditional love that he always embodied in my childish heart.

It is therefore in the most complete happiness – as you can imagine – that I spent the whole month of December 1995. It was the year when my beautiful Frederique – still in my big round belly – did me the honor of choosing me as her mom. And what can I say of 1996, that year when that 9-month-old little beauty was walking (yes she was!) her little walk towards the Christmas lights and the ornaments that were shinier than usual. 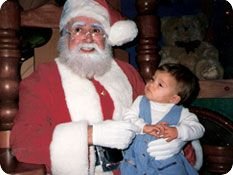 The little girl in me had never left but during those years, she resurfaced with such joy thinking that she had the opportunity to spend Christmas as it was in her wildest dreams. It wasn’t my mom and I – we can’t change the past – but somehow, it was better. It was my daughter and I! Some will say that living vicariously through someone else is wrong but how could I resist? How could I not enjoy this bundle of love, that we made from scratch my husband and I? How could I refuse myself the dream of a lifetime?

The Christmas that Frédérique spent in my belly (a bigger belly than Santa’s), I played hymns and rocked her in front on the illuminated tree while telling her stories filled with stars and wishes that come true. A stuffed snowman was playing music when we turned one of his big black buttons and we played him a lot! Tiny Christmas stockings were hung from a branch, filled with hope rather than gifts and with all the love that I already had for my daughter.

The following year, I was ready! The tree was even better, the lights brighter, the ornaments – made of plastic of course – weighing the branches that vibrated to the sound of music that played 24 hours a day. Snowman was still playing but this time it was Frédérique who was turning the magic button. My daughter was going to have the best Christmas ever.

Naturally, she sat on Santa’s lap at the mall. I still have the picture that immortalized that serious and dubious look, not at all funny. I bought her a red velvet dress, a white velvet bib, red stockings with white snowflakes, a red, black and white Christmas pyjama that would’ve been a copy of Santa’s costume if it didn’t say “My first Christmas”. She did not have a matching diaper because I didn’t find one! 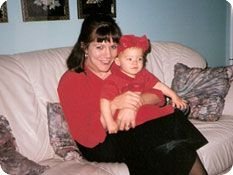 And to top it all off, Santa Claus came home in person to give her tons of gifts, and when I say a ton, I mean it. She still looked dubious and serious but she was never funny during important events like her birthday and Christmas. Not funny in a Queen Victoria kind of way. So I was being funny for both of us.

My motherly heart was proud and my childish heart was filled with joy! I wanted that night to last forever or at least more than the 10 minutes it took my daughter to open her gifts! And I think I was slightly disappointed when I realized that she preferred the wrappings and bows to any gift we gave her.

The memories of that first Christmas are about my joy much more than hers. After all, what do we know about Christmas when we are 9 months and four teeth old? She could not realize that Santa Claus had brought me the most amazing gift of all, a Christmas filled with true love, a first Christmas that compensated for everything else, the first Christmas of my life that didn’t leave me with a broken heart…

Hugs and kisses to all the moms and their babies!

Where are we with politeness?

With the family reunions fast approaching, should we force our children to hug an old uncle, talk with an annoying cousin or repeat polite phrases over and over? Here’s an opportunity to assess it all!

Once upon a time, there was a little girl who had more snow, more gifts, more stars and much better toys than she does now… Everybody knows that Christmas was better a long time ago. Right?