Once upon a time, there was a little girl who had more snow, more gifts, more stars and much better toys than she does now… Everybody knows that Christmas was better a long time ago. Right? 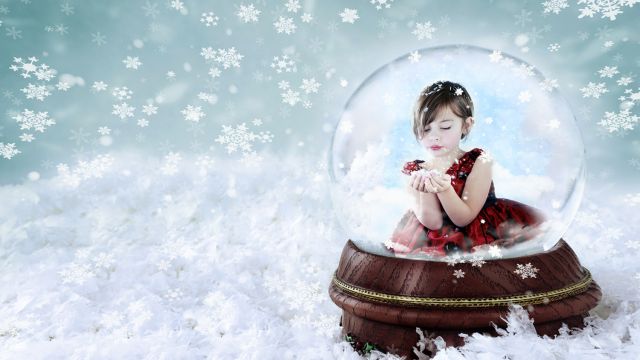 Inspired from Charlie Brown, the Return of the Jedi and the Little Mermaid (Not Ariel, the one who died at the end of the movie), my childhood Christmases left me with a lot of free time to play when Charlie Brown was on. Those were the days… Radio Shack was my favorite place on Earth, RC cars were sturdy, Five Roses cookies were tasty and snow forts were fun to make.

My favorite neighbour was Mrs. Fraser, a lovely lady whose face I can’t remember because each time I visited her, I played with a glass shoe that she had and didn't pay much attention to her. Sometimes, when my parents didn’t understand ANYTHING, I would grab a suitcase and move in with Mrs. Fraser for a few hours. For Christmas, she always gave me a gift wrapped in strange and old paper. I knew that her gift would not be very modern but I knew that the lady who owned Cinderella’s shoe could never let me down.

There were also three gifts shaped like Turtles boxes under the tree. My aunt always gave us chocolate and we had learned to eat it wisely because our brother would prefer to lick them all than to give us one of his. After all these years, he knew that my sister and I would have finished our boxes long before bedtime and he didn't want to be punished by sharing with us just because he was smart enough not to eat them all in one night!

These gifts, on top of the ones wrapped by our parents were the best of dreams and gave us something to talk about each time we walked by the tree. Despite my sister’s efforts, we couldn’t touch them before the Midnight Mass where the chorus represented the most beautiful side of a church where we usually whined and complained.

Those were the days.

Back then, our mom had to tell us to watch television for a while because we played outside until we dropped. “Take your coat off, it’s wet and you’ll get sick!” Then, we threw a bit of snow on the stove to hear it go “psssht” and admire the puddle it would quickly make. We would grab a few freshly baked cookies and sit in front of an old and small TV. Once a year, the little mermaid was turned into meerschaum because the prince did not like her so much so we cried a lot. We couldn’t believe that our mom made us watch that! 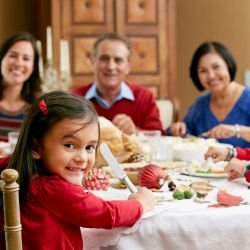 On December 25th, we had dinner at my grandmother and grandfather’s house. They blessed the whole family at once because it was easier that way since they had 14 children and grandchildren in every corner. My grandmother was born in 1897, three years after Billy the Kid died and she passed away in 2003, the year Skype was founded. Can you imagine how many stories she had to tell us? How many recipes she knew? How many relevant tips she could give us? Each Christmas was her last. She said it 25 times. After all, she witnessed 3 centuries!

My grandfather was more or less The man who planted trees but with a family of his own. He was a loving man who grew his vegetables until the end of his life and he could find water and predict the weather with branches. His daughters loved him. With so many amazing people in such a big house, we could never get bored. We were spoiled with love, joy and discussions.

Later, my grandmother passed away and the family was separated. Christmas became quieter. However, after years of whining and complaining that Christmas is awful and busy and expensive and so forth, I realized that I complained just because everyone else did and I decided to get over it.

Of course things are not the same. They never will be. But today, I must write the new chapters of my own Christmas stories.

Obviously, there never will be as much snow because I grew up but when I mention it, it encourages my daughter to tell me about climate changes like I did my parents about brushing their teeth. It doesn’t stop us from playing outside.

My very own Five Roses is called Ricardo and I try his recipes when I want to bake cookies while my children watch Brave. I still rent Christmas movies and I scream “Charlie Brown is starting!!!” when I want my children to come back in the house. I try to talk with my children as much as I can and I smile when my neighbour Nicole (who knows my daughter but not me) leaves a present by the door a week before Christmas.

Whether to send wishes by mail or to identify gifts, here are five beautiful DIY Christmas card ideas for you and your children.

If your first baby is less than one year old, you are about to experience your first Christmas as a mom. And believe us, it will be quite an experience.

You’ve been dreaming about this for years. You could see yourself rocking your baby by the fire and taking them to see Santa, but what will it really be like?