We look at their patio furniture, we talk to their kids, we see them every day… But do we know our neighbours? Would you celebrate with yours on Neighbours Day? 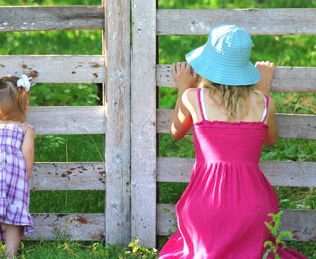 There are all kinds of neighbours, neighbours that we like, loud neighbours, neighbours always in a hurry and the ones that talk to us by the fence all day. Sometimes, we can’t wait to move out and forget about their late night music but usually, we are sad when they go away and we hope that our new neighbours will participate as actively as they did to our daily happiness.

These neighbours are part of our lives. A sad day can suddenly change when the elderly lady across the street tells us when it is “allowed” to wear white shoes or when we walk by some kids playing hockey: “I’m Sydney Crosby!”

There are many benefits to a friendly neighbourhood. Neighbours who know when you come and go can keep an eye on your property and on your children who walk back from school or as they cross the street. Children can find other children to play with spontaneously around the house. Neighbours give us the required motivation to decorate the front door during the Holidays and, like a very local newspaper, they tell you about births and new businesses. In short, they make you feel at home.

In every city, there is an area where people seem happier. When you arrive, you immediately see people who know each other, who gossip about the neighbourhood, who talk about gardening, traffic and who gather in the park, listening to the neighbour’s son playing guitar or laughing at the funny tai-chi techniques of a beginner.

We usually judge an area or village by its atmosphere and the happiness of its inhabitants. Indeed, going for a walk is much nicer when you meet a friendly neighbour, walking her dog, who tells you tales about the local baker. Sometimes, the houses in such areas even gain value because the local happiness is contagious and makes people want to be part of it.

On June 2nd 2012, thousands of people will gather to celebrate Neighbours Day and meet new people in their area. Like the organizers say, it is not important to go overboard, what matters the most is to invite everyone. Register your event on Neighbours Day’s website or on Facebook. Think of a theme, ask everyone to bring a dish, to swap plants, to bring games or music instruments, to dress up or to bring make-up for children. Attach a few balloons to the trees and tables to make it more festive and take some time to talk to the ones who share your streets.

The story of a beautiful event

The aim of this friendly event, which began in France in 1999, is to encourage neighbours to get together for a drink or meal on a given day at the end of May each year. Mr. Atanase Périfan, a municipal elected official in Paris, founded this event. The objective is to create a sense of solidarity among neighbours and build more human-oriented cities. In 2011, nearly 12 millions Europeans participated in Neighbours Day celebrations in their neighbourhood. In fact, in addition to France, Neighbours Day is now celebrated in 44 countries. Wherever this event has been put on, it has been a great success.

To find out more about Neighbours Day in France and Europe, go to www.european-neighbours-day.com

Too many gifts for Christmas?

Is your Christmas tree hidden by piles of presents? Do your children take hours to open all their gifts? Maybe they just have too many…