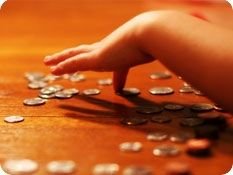 Some parents base their choice on age : 7 years old = 7 $ per week, 8 years old = 8 $ per week, etc. You also have to be realistic. If your child mostly wants to rent movies with his allowance, giving him 4 $ a week won’t be enough to cover the 4,99 $ cost! And in that case, chances are that he won’t save up to rent a DVD  in two weeks!

Finally, another good idea would be to space out the payments when the children grow older. Changing  to an allowance every 2 weeks or every month would teach them how to better manage their money and plan in advance.

"How much do I get for taking out the trash?"

Beware! Here is one of the pitfalls of an allowance. Your child may wish to negotiate a little money every time he performs a chore. Giving money for household chores doesn’t encourage the sense of sharing nor the collective responsibility.  Mutual help among family members should not be redeemable for cash. Every family should decide which tasks can be paid for, and which can’t. Determine in advance the tasks for which you will pay a special allowance. If, for example, you pay a neighborhood teen to mow your lawn, you can give the same amount to your child if he wants to handle this task.

To avoid having to negotiate with a “How much do I get for taking out the trash?” or “Do I get money for doing my homework?”, make two lists with your children. One with everyday tasks (making their bed, picking up their clothes, emptying the dishwasher, taking out the trash, etc.) that are not open to negotiation and for which they will not be paid for. Be clear and firm on this point. Then, list the outstanding tasks for which you will pay them (for example: cleaning the windows, painting the fence, washing the car, etc.).

According to specialists, giving an allowance according to the child’s academic performance is a bad idea. Yes, it’s a little extra when he gets an amazing report card, but it’s not so good on a daily basis. Education is too important to convert it into cash like this.

According to Lewis Mandell, professor at the University of Buffalo and financial education guru, pocket money could be harmful, especially if it’s not managed very strictly. “Getting a child accustomed to receiving money without effort is the best way to prepare him for social assistance”, said Mandell in the August 2009 issue of L’Actualité. 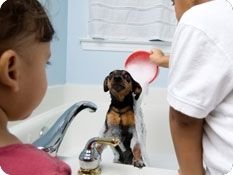 Even if you’ve decided to give your child an allowance, your job does not end there. You still have to supervise him during the first few months, accept that he will buy stuff that you think is superfluous or unnecessary, but of course intervening if his purchases go against your values (cigarettes, degrading magazines, lottery tickets, etc.). At that point, you could easily stop giving him money, or at least have an honest discussion with him. Because putting an end to the allowance could motivate him to find money in other inadvisable ways.

Finally, it could be easy to use money as a punishment or blackmail, but you wouldn’t really get anything out of it in the long run. He didn’t make his bed? How can you deprive him of his allowance if you do not pay him for this type of task? Be consistent and trust your judgment. It is the beginning of a common learning experience, but mostly a learning experience for your child who is learning how to behave in the adult world. You are trusting him, so he must understand that he can’t betray that trust.

What is a stay-at-home mom’s work worth?

A mom’s work never ends and her professional stress is intense. How much would her job be paid if someone, somewhere, decided to give stay-at-home mom's a salary?

How not to fight about finances

We often hear that money is a sensitive issue for couples and that it can be the source of many fights. Yet the state of our finances has a direct impact on our quality of life and our future.