To save, of course, but also to make a gesture towards saving the environment. Here is some amazing information on diapers!

A disposable diaper requires between 300 and 500 years to decompose in nature. In addition, few people know that throwing stool in the garbage is forbidden. Feces should be put in the toilet to prevent the proliferation of bacteria and viruses that present a real environmental hazard.

Disposable diapers are the third most commonly discarded item after newspapers and containers for beverages and food.

Estimated cost for a period of 30 months

It is estimated that 9% of Quebec families use cloth diapers.

What are the diapers made of? 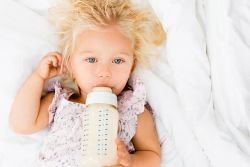 The washable diapers are made of natural fibers, usually cotton, but also bamboo. Natural fibers breathe more than the products used in disposable diapers, so the temperature inside is lower and there is less risk of contamination.

Also, with cloth diapers, we know when it is soiled right away. With a washable diaper, the baby does not stay in a moist environment for too long, which is conducive to diaper rash. This also encourages the baby to become clean sooner than with the superabsorbent diapers, because the little one does not even realize that they are wet.

Some exterior coverings are made of nylon or plastic. There are also diaper covers with elastic waist and thighs that prevent leaks.

In the manufacturing of disposable diapers, there is bleached wood pulp, plastic and chemicals. Often, disposable diapers are preferred because they are very absorbent. It should be noted that sodium polyacrylate crystals - the same crystals responsible for the toxic shock of sanitary tampons - are used to increase the rate of absorption, and these are often responsible for irritations and skin reactions. 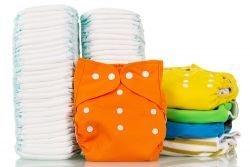 The choice of cloth diapers

If you have decided to embark on the adventure of cloth diapers, you will have to choose between several models. There are flat diapers that you need to fold or form-fitting cloth diapers, which are very similar to disposable diapers with velcro or snaps. But there are multiple models and each has their advantages and disadvantages.

Also, be aware that most brands of cloth diapers offer thin lining pads that you place at the bottom of the diaper. They are not absorbent, but they protect fabric, reduce rubbing and rinsing time and prevent stool from sticking to the diaper. Also, you can coat diapers with a diaper cover to limit leakage.

A few small actions you can do for a greater concern for the environment according to the layers you use!

I haven’t been a father for long. For some, I’m not even a father. Maybe that’s because I didn’t become one in a scream. In fact, I was adopted four years ago.

Getting ready to conceive!

By deciding to have a child, you are choosing to experience one of life’s most meaningful moment.

What are future fathers thinking about? - Part 2

Because our “What are future fathers thinking about?” article was so appreciated by all, here is a sequel! We want to know what prospective fathers have on their mind!