Breastfeeding and its impact on sexuality

A growing proportion of mothers breastfeed their babies, and the virtues of breastfeeding are now well known. However, we rarely speak of its impact on sexuality.

After giving birth, numerous changes in your body can influence your sexuality. Your body changes in shape and size, often leaving you with newfound curves, stretch marks and lochia (post-partum bleeding), which can make it difficult for some of you to feel desirable. The aftermath of giving birth can also be painful, for example, dealing with a damaged or bruised perineum.

In the first few days following birth, the accumulation of milk can make the mother’s breasts feel quite painful. Nipples are often very sensitive in the beginning of breastfeeding. Given the time it takes for mothers and babies to adjust to breastfeeding, many women find themselves having serious nipple soreness. Other problems, like mastitis and cracked nipples, are also common. That being said, many women have a hard time considering their breasts as sexual organs during that period and do not wish for them to be caressed.

In the first phase of breastfeeding, breasts will also be bigger and harder since they are gorged with milk. This bustier chest can be a source of pride for women and help them feel more attractive. On the other hand, once the breasts empty themselves and become softer, or when stretch marks appear, it is possible for certain women to have trouble accepting the changes in their breasts. To make matters worse, these changes do not correspond to the beauty standards set by advertising.

During sexual intercourse, it is completely normal for breast milk to drip from the breasts. Stimulation of the breasts and most of all, orgasms, provoke an ejection reflex. Some couples may feel uncomfortable with this milk spill, while others might find it exciting. The longer you breastfeed, the harder it becomes to induce an ejection reflex when you’re not breastfeeding. In other words, this situation is only temporary.

In essence, it has been shown that there are many changes in women’s breasts during and after breastfeeding. Whether these changes are considered positive or negative, they are sure to have an impact on a couple’s libido and the way they incorporate the woman’s breasts into the sexual relationship. 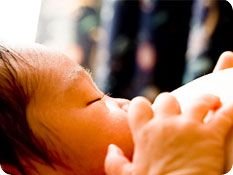 After childbirth, there is an important drop in your levels of estrogen and progesterone.  This hormonal variation is often responsible for the decrease in vaginal lubrication and the thinning of the vaginal wall, making sexual intercourse potentially less comfortable. In addition, these changes can have an impact on libido and mood. Finally, overall fatigue and feeling overwhelmed can sometimes lead to baby blues.

Likewise, breastfeeding also causes hormonal changes. Prolactin, the hormone responsible for milk production, also increases your baby’s feeling of attachment to you. As for ocytocin, responsible for the ejection reflex, it increases the feeling of love. These hormones create a feeling of well-being for the mother and prompt  her to take care of her baby. For some women, this intense feeling of uncondional love and happiness can make them feel satisfied to a point where they turn away from their partner and don’t feel any sexual desire.

Nevertheless, the effects of breastfeeding on women can be completely different. For certain women, breastfeeding can be a very sensual experience. It is possible for them to experience vaginal lubrication, arousal and to sometimes even reach a feeling of well-being resembling an orgasm. These love and attachment hormones reach their peak after childbirth and progressively decrease throughout breastfeeding, lessening their impact on the mother’s sexuality.

As illustrated above, women can react in multiple ways to the changes caused by breastfeeding. Some may feel prettier, more sensual and even have an increased libido, while others may have trouble feeling like a woman again.