What can be done when our children refuse to consume anything other than milk ? Baby-led weaning is a good alternative option if food diversification doesn’t do the trick. 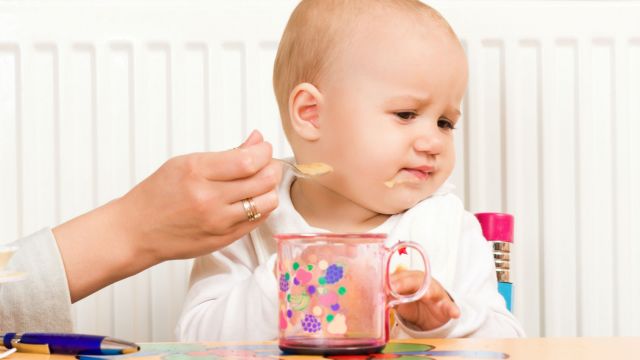 For most parents, food diversification goes off without a hitch. Their babies get used to cereal, then veggies, fruits, meat and, over time, many other things. On the other hand, there are those babies who make things trickier by refusing purees. Worried moms might try to persuade their babies to eat more by varying between flavours, or trying to make eating fun by singing or using the airplane method; in which case the spoon seems like a plane flying onto the baby's tongue; but nothing seems to satisfy them quite like milk. What’s the best way, then, to curb your baby’s supposed hunger strike and make sure he or she gets all the necessary nutrients?

When should you start worrying?

According to nutritionist Sandra Griffin, it’s extremely rare that you’d ever need to worry. There are, however, several factors that explain why children eat less than we would like. Griffin says we must first wonder whether or not they’re actually refusing to eat or if it’s just because they’re eating less compared to other babies. Since babies’ appetites vary greatly, even if your child is eating very little, it may be enough for he or she.

Also take into consideration that factors unrelated to appetite may play a role. Something as simple as a cold or a period of teething might be enough to reduce a baby’s appetite for a week or two. "When a baby is six or seven months old and starts on solid foods, he or she may very well prefer to drink milk, which is normal,” Griffin explains. She also mentions that she "would be concerned if a baby over nine months who was eating before and wasn’t sick or teething refused to eat at every meal for several weeks, especially if he or she is not breastfed."

Most often, a parent’s greatest concern is the possibility of some sort of deficiency. Griffin says the most common one in babies is iron deficiency, but it's preventable. “Breastfeeding exclusively for the first six months to introduce iron-rich foods first is recommended,” Griffin says. If these conditions are met—even if the baby refuses meat or other foods—he or she will be equipped. She mentions aswell that “we mustn’t forget that the introduction of solid foods from the age of six months is only to complement breast milk or preparation. Solid food is not the staple diet until the child is 12 months old, or more like 9-10 months old in reality.” 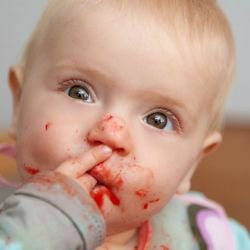 More and more parents have tried to understand their children’s desires and work with them, rather than imposing their ways. This way of thinking has brought to light baby-led weaning. According to Griffin, this method is another way of offering food to children from the age of six months and involves all five senses.

“Babies touch their food, put it in their mouth themselves, and learn to chew and manage the pieces in their mouths,” Griffin explains, emphasizing that this is a great way to introduce meat—which isn’t the least bit appetizing when pureed, even for adults. It’s also a good way to introduce other foods to babies who don’t like the texture of purees. Griffin says, however, that “we must keep in mind the baby will probably eat less pieces than if the meals were mashed, especially at first." When your baby is only rejecting a few foods, you can combine purees and solid foods to give a variety of options.