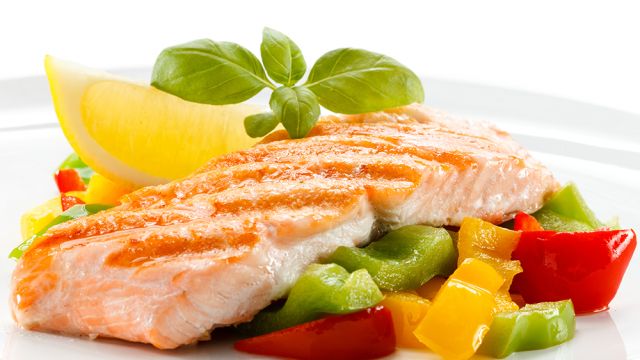 What days of the week do fish hate? Frydays!

If you don’t want your children to hate fish like fish hate Frydays, it is important to introduce fish in their diet as early as possible, which can be as early as 7 months old1. That way, they will develop their taste for fish. Serve it pureed first and then chopped around the age of 9 months. However, it is recommended to wait a few weeks after introducing meat before trying the fish.

What’s the difference between a fish and a piano? You can’t tuna fish

You can introduce fish that comes from commercial fishing or farming in the diet of children without worry. These fishes are salmon, fresh or frozen herring, haddock, canned tuna in water, sole, halibut, mackerel, and cod.

Moreover, it is necessary to be careful with some varieties of fish that contain more pollutants, including mercury. These should be given to children in moderation. Consumption of albacore tuna must be limited to 75 g per week (2.5 ounces) and that of fresh or frozen tuna, swordfish and marlin should be limited to one per month2.

Only sport fish with no restriction of consumption can be served at will to young children such as brook trout, lake whitefish, rainbow smelt, Atlantic salmon, Atlantic tomcod and blueback herring2.

Reminder: There is no limitation for canned light tuna. For children, it is best to choose it in water to reduce the amount of salt.

Lemon’s juice does not change a thing!

Raw or partially cooked fish and seafood are not recommended for young children to avoid contracting foodborne infectious diseases. Lemon’s juice does not cook fish. It only reduces the bacteria that lay on the surface of the fillets. The only solution is heat, as cooking destroys the parasites that are present in fish.

Fish on the menu, not just on April fools!

Fish is a source of proteins and good fats. It is an excellent option to contribute to the health and development of young children. Two to three meals of fish should be served every week.

Nathalie Regimbal is a dietician-nutritionist and mother of 3 kids. She oversees Manger Futé, a team of people passionate about diet that empowers those who want to feed children healthily. To demystify nutrition and diet, Nathalie gives advice on the show La Cantine on Channel V. In addition to her collaboration with Mamanpourlavie.com, you can read her articles in several print and online magazines. Among others, she is a collaborator in nutrition for Yoopa and Célébrons magazines. To make meal time easier for families and initiate kids to cooking, Nathalie has worked hard to write inspiring books: the best-seller Du plaisir à bien manger… 80 recettes gagnantes pour les familles, and the Mandoline series of illustrated cook books for children, the latest one having just won the prestigious prize of the best French Healthy cooking book from the Gourmand World Cookbook Awards 2010. To help with meal preparation in daycare centres, the team of dieticians at Manger Futé offers classes and coaching. Manger Futé has also published the practical guides Élaborez rapidement un menu équilibré dans votre service de garde and Élaborez rapidement une politique alimentaire. Discover Nathalie Regimbal's books: Du plaisir à bien manger – 80 recettes gagnantes pour les familles Mandoline – J’ai ça dans le sang! Mandoline – Développe tes défenses naturelles!

Should pregnant and breastfeeding women limit their sushi consumption, avoid it or eat as much as they want? Extenso demystifies the matter.

Did you know that women who lack essential nutrients at the start of pregnancy put their own health at risk and perpetuate a cycle of poor mother-child nutrition? Healthy eating is crucial.

Eating shouldn’t be a worry during pregnancy, but there are many types of food that pregnant women should watch out for. Learn how to keep you and your baby safe.