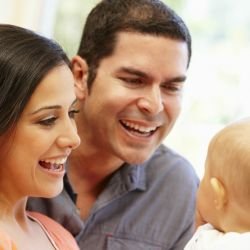 Baby talk: what has a negative impact on a baby's development?

The characteristics mentioned for baby talk and that are naturally used allow adapting to the baby when he is small. As he grows up, he needs language examples that are more refined to develop his sounds, his vocabulary and his sentences. To support the development of his vocabulary, we must speak as normally as possible to our child from birth if we want to make it a habit. It is better to say “look at the train” than “look at the tchoo-tchoo” Chopping words and making words up based on the sound that they make is useless for a child.

As mentioned before, in our first exchanges with our baby, we instinctively feel the need to transform the way we speak to him and it helps him. When he begins to produce words, he cannot produce every sound nor say every syllable. He does what we perceive as mistakes.

For example, instead of giraffe, he can say “yaya”. As an adult, it is tempting to say yaya too and speak like him to make him understand more easily but that is when we should be careful. How will he be able to know the real word, use it, remember it and learn it? And how will he be understood by other people who do not know what yaya means? Our role is to show him the right way. In that sense, it is much better to repeat the word properly more than once in the same sentence. For example, you could say “This is a nice giraffe, you can place your giraffe in the drawer and we will grab the giraffe again later on.” Repeating will help him memorize and eventually pronounce the word like you.

For tips and information or to find more ways to communicate with your child, consult The Hanen Centre.

Sylvie Desmarais has been a speech therapist for thirty years and is the mother of two big boys. She always wanted to make her knowledge about language and communication understandable and accessible. Former Université de Montreal teacher, she has given many conferences to parents of young children and she spent much of her career training doctors and early childhood professionals. She strongly believes in the importance of early detection of language disorders, which is why she participated in many activities to raise awareness and stimulate the development of language. For her, it is essential that parents follow the evolution of their children and communicate with them. It is to give them the tools to do so that she wrote the "Language guide for 0-6 years old children" (Guide du langage de 0 à 6 ans) published in 2010 by Éditions Quebecor. 2144, montée Monette Laval, QC, H7M 4T6 514-924-6471 sdesmarais@mon-orthophoniste.com

Cries and shrieks are the first signs that your baby wants to communicate. Newborns quickly understand that the sounds they make will cause a reaction from the people around them.

Here's how parents can encourage the development of their child’s language, make them want to communicate, and promote dialogue.

Your baby’s first steps toward learning to speak

Your baby is born ready to learn language! His brain has special structures that enable him to learn about sounds, words and sentences when you speak to him.