Whether as a new mom or as an experienced one, every pregnancy is unique. The ideal of pregnancy can be dampened by a nauseous state that won’t go, a bad start caused by a surprise pregnancy, hormonal changes that put the focus on your emotional self. Your whole universe can turn upside down.

You can be filled with negative thoughts, doubts, questioning. You can feel like you are losing control of your emotions by becoming oversensitive to certain matters. You can also realize the pattern of a distress or feelings that run in the family. This downward slope can lead you to a deep state of loneliness and guilt.

Guilt is the feeling than stems out of being wrong, to take responsibility for something, whether it is justified or not. It will manifest itself through anxiety, worries and a state of depression that will have much more to do with an emotional state than with hormonal changes. Guilt takes its roots from a feeling of not being capable, of being wrong, of fear of disturbing, of being out of place, in the desire of being perfect, in a need for control and in personal beliefs like never being good enough, kind enough, in the fear of not being loved by our child. Guilt is not a cause but a consequence of all this.

It’s easy to be hard on yourself, to take the blame and to let your fears of being a bad mom rule. It’s easy to bear most of that child’s achievements on your shoulders, even if you have a great father to help you. But why is it so easy to let guilt win over reason? Because it is the reflection of your own story.

My clinical interventions and observations eloquently show the formation of this guilt and its recurrence during pregnancy. Pregnancy is the perfect occasion to remember your own stories, experienced in utero.

In its intrauterine experience, the embryo or foetus systematically links its own presence to every source of conflict or discomfort experienced by his mother or father. He saw what his mother went through and its primary objective is to reach the unconditional love of his parents. As it feels automatically responsible, it tries to fix what caused the feelings of rejection and abandonment. As it is powerless to do so, the suffering experienced soaks in and is buried in the unconscious, looking for any clues that can help him finally succeed in fixing everything. This is the way intrauterine memories travel through time, they influence much of what we are as adults and can even be transmitted to your unborn child. 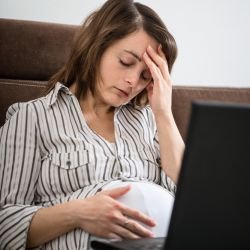 Here are a few examples to illustrate my point.

A young woman is in her third pregnancy. She has a deep sense of guilt because she rejects her pregnancy. This feeling persists despite all of her efforts to change. This pregnancy, although she and her spouse accepted it was not expected. The family was supposed to stop after two children. She sees this as a challenge. She is tired and does not have much patience with her other children. She feels like she is abandoning them.

A deeper explanation is that she couldn’t imagine herself going all the way with this pregnancy and she was afraid of what her family members would think. She wasn’t anxious to give birth. And she was deeply affected by memories of her parents arguing.

Her guilt was associated with fears of judgment, argument, and not be up to par. Working with the source of these fears, several experiences of her own intrauterine life surfaced:

These intrauterine memories strongly contribute to a feeling of rejection and the circumstances that surrounded the arrival of her third child have put the focus on what the mom was already living. Following her transformation, she found her love for her child that was present deep within her but blocked by her own experiences of rejection. She also found the desire to give birth. Almost three years later, her little child is blooming and the other family members noticed a significant difference in the expression of their mom’s confidence and her confidence that is very different from the previous insecurity. According to what they say, there is no problem. Life is beautiful! And this mother is performing her role with more harmony and confidence.

Maternity: fulfilling for some, a duty for others

How can we explain that some women are fulfilled by their motherhood while others only see it as part of their "duty as a woman"?

Love is at the heart of maternity

Love is at the heart of our experience as mothers and it is present at many levels. These loves are lived differently for each one of us and they influence our experience.