Is it normal to feel contractions during pregnancy?

Some will never feel contractions until it is time to give birth, while others will feel them after the first couple of weeks. The pain may resemble premenstrual cramps, hunger pangs or a hardening of the stomach. Contractions are normal as long as they remain painless, rare (no more than fifteen a day), irregular and disappear as quickly as they appeared. Nonetheless, you should take note of the time of day or what you're doing while the contractions occur.

Most of the time, this is a normal and natural reaction of your body, but it wouldn't hurt to talk to your doctor. "The uterus muscle is changing in volume, shrinking, hardening and relaxing", say René Frydman and Christine Schilte in their book Attendre bébé (Waiting for baby). Some women may have to take a leave of absence from work because they are experiencing too many contractions and these may work on the cervix (without necessarily dilating), creating an opening and risking a miscarriage.

Amazingly, it is possible for women to feel “false contractions”, also called Braxton-Hicks contractions, throughout their pregnancy. These contractions are of low intensity and painless. In fact, women feel their belly tightening up and that’s exactly what’s happening! The uterus hardens for 20 to 30 seconds. We call them “false” because they do not dilate the cervix. Even if you have felt false contractions during your pregnancy, it will not influence the intensity, length or steadiness of the “real” contractions.

“Will I recognize a real contraction?” and “How will I know if the real labour has begun?”  are the first-time mothers’ two main questions. Here are some good clues: 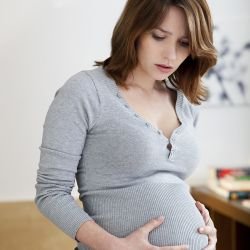 Where does it hurt?

Contractions start in the abdominal muscles, but some women may feel pain in the kidney region. We say women “give birth by the kidneys”. In fact, the baby’s head is pressing at the base of the sacrum, a region that holds many nerve terminals.

Delivery hurts, but remember that it is a positive pain, since the outcome is an adorable little being that will finally see day. Birthing pains are the only ones to “make sense” physiologically since they are announcing the arrival of a baby. Remember that it's a joyful event. What the baby goes through during labour is an incredible event worthy of an Olympic medal!

The adrenaline rush created by the overwhelming stress during delivery works to stop endorphin production (to support the pain) and counteracts the effects of the oxytocin that contributes to contractions of the uterus.

How to time your contractions

You’re hesitating? Call the maternity department, a birthing home or your midwife and they will help you demystify the contractions… or the labour. 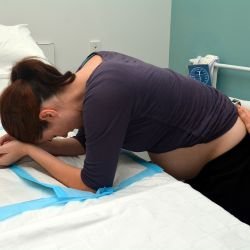 The baby is here! Fresh, all wrinkly and magnificent, of course! But for you, labour isn’t quite over just yet. A few last (and intense) contractions and a couple of pushes to eject the placenta. Don’t panic! Once the baby is on top of you, the pain seems to ease away.

“Having had regular false contractions, I would say that for me, a real contraction was the one that made me say: “Hell with the bath, lying on your left side, taking a walk and blah blah blah! Call the midwife and my birth guide Kathleen! Physiologically, I had to change my breathing.” Caroline

“I had many Braxton-Hicks contractions throughout my pregnancy starting from my 20th week. At first, I thought the baby was lying “sideways”. My belly would harden and I thought it was the baby’s back resting on my belly. A colleague touched my belly and said: this is too large for it to be the baby’s back at 20 weeks. It’s hard everywhere, it’s probably a contraction”.
Line

“My false contractions were a little painful but the real ones started out in my kidneys and resonated through my entire stomach. I had never felt that before, I knew that this time, they were the real ones!”
Karyne

“Contractions may feel like menstrual cramps, but the pain is multiplied by 50! I also had the impression that my stomach wanted to rip apart. My belly became so hard! And I felt a pull from one side to the other. I might not be the best example since for both of my deliveries, my babies were posterior. The pain was in my lower back and kidneys. It’s really hard to describe. I think you have to live it to fully understand. But it’s a bearable pain if you decide to accept the contraction and work with it to reach your one and only goal: give birth!”
Marie-Claude

“I only had painful contractions at 9 cm! Otherwise, I only felt them in my back. It’s really because of their steadiness that my boyfriend (not me) insisted that we head out to the hospital. Had it only been me, I would have probably given birth in the car!”
Genevieve

“During the fake ones, my stomach felt like a soccer ball. During the real contractions, I had kidney pains at regular intervals. My stomach never hurt, it was my back that wanted to tear me apart.”
Sophie

“Labour started on the way to the hospital after my water broke. It wasn’t that painful. But an hour later, it started to really hurt. It was like a huge cramp that paralyzed me. It hurt so badly. I still thought it was bearable even though I couldn’t help making faces and breathing loudly. The pain was in my lower back and in my belly. It didn’t remind me of any pain I knew.”
Valerie

“The first contraction is special. It doesn’t hurt, it’s just uncomfortable. Then, as labour progresses, the pain spreads to the lower back, like a heart attack for your ovaries (!) that seems to intensify.”
Chantal

“For me, the big contractions hurt in my stomach, lower back, and from my pelvis to my knees. Yes, down to my knees! That’s what surprised me the most about my contractions! Never would I have thought they could hurt that much! With every contraction, I felt like my pelvis was about to break.”
Julie

“During my second pregnancy, I had false contractions every day during the last 5 weeks! I was highly encouraged to take a bath because it would help ease my contractions…but they forgot to tell me that when the labour has begun, a warm bath will accelerate the process! While I was in the bath, the pain intensified and the contractions became closer together. (I didn’t have a watch in the bath so I don’t know how far apart my contractions were!) Let me tell you it was about time I left for the hospital: I gave birth 40 minutes after being admitted!
Sonia

Delivery: is it time to go?

Since the beginning of your pregnancy, you have been fearfully and impatiently waiting for your labor to come.

Pregnancy and back pain: is it a fatality?

Pregnancy changes your body in many ways and brings you all kinds of discomforts such as back pain. There is a solution: get a massage!