The days when 75% of all children had their tonsils removed are over but this surgery, like the extraction of the adenoids and the installation of ear tubes are “routine procedures” for ENT (ear, nose and throat) specialists. They perform an average of 12,000 extractions every year in Quebec. In fact, they are the second most common surgeries performed on children.

For parents of children who must undergo them, the announcement can generate a flood of questions. Here are the answers.

What are tonsils and adenoids for?

They are small round masses of lymphoid tissue: the same tissue that can be found in other parts of the body and produce the cells that help fight infections (bacteria and viruses). Tonsils “filter” infections in the throat while adenoids are located behind the nose.

These masses of tissue develop at birth and slowly grow to reach their maximum size around the age of 6 years old, after which their volume slowly decreases.

Both their nose and throat are not endangered when these filters are removed. The body will develop other defence systems against infections.

Why and when should they be removed?

Repeated infections in the areas where they are located may eventually cause them to swell. Researchers did not find the cause of repeated infections yet. According to Dr. Sam Daniels, ENT at Montreal Children’s Hospital, a genetic element may be involved but an environmental component could also be targeted.

The only way to slow this hypertrophy is to remove the enlarged tissue masses. 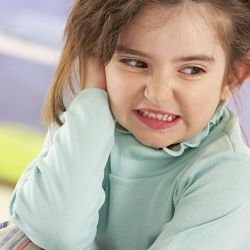 The doctor and ENT can order tonsillectomy for various reasons: if the child (or the adult) suffers from obstructive sleep apnea, if the swelling makes it hard for him to swallow, if an abscess is detected on the tonsils or if he suffers from chronic, recurrent or severe tonsillitis.

On another note, adenoid extraction is necessary when the child (or the adult) suffers from chronic nose congestion accompanied by a runny nose, if he suffers from recurrent sinusitis or frequent ear infections (otitis) – that antibiotics cannot fight any longer – or if they suffer from sleep apnea.

Your child will have a sore throat and may suffer from earache. This pain could last from six to ten days.

Here are a few tips to soothe the pain and promote healing after surgery: 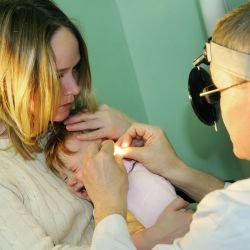 The fluid trapped behind our eardrum is a breeding ground for infections and is often the cause of eventual deafness problems and recurrent ear infections for many children.

If such is the case, the ENT can prescribe the installation of a little tube in the eardrum. “This tube allows the ear to ventilate to facilitate fluid release”, says Dr. Daniels.

It is the surgery that is the most frequently performed on children. Around one million tubes are installed every year in North America.

Nasal cortisone and the use of a breathing mask or of a device for sleep apnea may be alternatives to the removal of adenoids and tonsils but they are not suitable for all children and are not a very effective barrier against infections.