The same day we become parents, our parents become grandparents. Beyond their bloodline bond, grandparents perform a task and adapt in ways that vary from one person to another.

Paradoxically and although grandparents were living with the rest of the family at the beginning of the last century, grandchildren had very little time to get to know them – about 10 years according to Health Canada.

More than a third of Canadians aged 15 and over see their grandparents once a month or more.
– Health Canada

The clash of ideas

That new reality brings several changes in everyone’s lives… Indeed, if many parents appreciate having and grandma or a grandpa to support them in this adventure, others feel totally overwhelmed and don’t know how to react to such an intrusion of their parents in their intimacy. “My mom loves our son but sometimes, enough is enough! She always wants to rock Jacob, give him a bath and give him a bottle even if she knows that Nathalie breastfeeds!” Didier perfectly realized that the relationship between his wife and his mom was becoming more explosive every time they were in the same room so once day, he decided to leave them alone and went out with his son. “I finally told my mother-in-law to mind her own business! Of course at the time she got angry and she even sulked for a few weeks. But she finally understood and now she is more careful when she talks to me.”  Nathalie admits that she was really afraid of her mother-in-law’s reaction but because she was even more afraid of her repeated intrusions, she preferred to talk to her.

13 % of Canadians contact their grandparents each week by phone or by letter and 22% do so each month.
— Health Canada 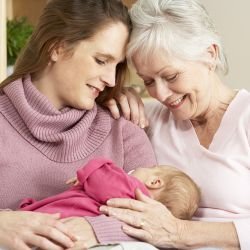 At the heart of disputes

The care that must be brought to the baby, from nursing to diapers, sleep and discipline are very sensitive subjects. “To me, sentences that begin with Back in the days are unbearable!” says Nathalie, the young mother of two children. “Of course, mothers and grandmothers have tips to share and I want to hear them but not if they impose them. When my stepmom tells me that her children were clean on their twelfth month, she makes me feel incompetent because Julian is not clean after 32 months.”

So, before you no longer dare to ask for help out of fear of fighting with granny, here are a few tips: 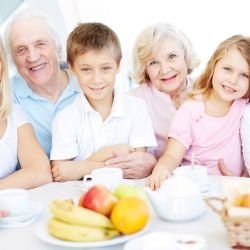 If, on the contrary, the grandparents are not present enough for our children, it is possible to make it happen by inviting them more often, by asking them to babysit for a few hours, etc. You can also ask them to write down stories of their childhood in a notebook, to draw the family tree, share tips that they would like to share for the adults that they will become… Specialized notebooks, similar to pregnancy books, are available in libraries and contain questions and answers and photographs spaces. You can also add your personal touch and tells stories that are specific to your family.

A special day to celebrate!

Children gain a lot from their contact with their grandparents; therefore, it is important to nurture strong and healthy relationships, even if it means that you will have to make compromises. Don’t forget that one day, you could also be a grandfather or a grandmother someday! So, next Sunday, September 7th 2014, celebrate Grandparents Day because even if we didn’t all have grandchildren, we all had grandparents!

It is the law

The law says that parents cannot, without serious motives, stop grandparents from bonding with their grandchildren. If the parents are refusing to let you see your grandchildren, you can present a request to the Superior Court of your province to gain access.

Are your plants poisonous?