Cleaning, washing, scrubbing, changing diapers, washing dishes, cooking… so many things to do, so little time. How can we split tasks evenly? 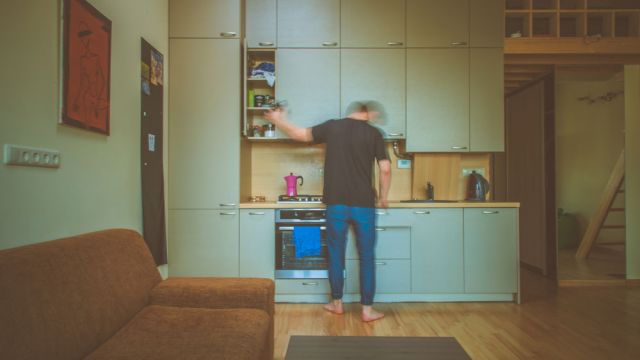 After money, household chores are the second greatest source of disagreements for couples. (What a chore.)

Admittedly, when running a family household, there’s a lot that needs to be done. From diaper changing and taking out the trash, to scrubbing the bath and tidying the playroom, there’ll be a good three or four hours of cleaning after the kids are played out. The question becomes: how do you split up chores more evenly between two people who, honestly, would much rather be doing something else after work?

We asked our Facebook followers how they were doing in the chores department and found out that, disappointingly, most women still do everything around the house. With working mothers entering the picture more and more, it’s total nonsense that this still happens. Finding a solution that’s fair for everyone is key, in order to avoid frustration that’ll chip away at your relationship.

If you feel like you’re doing too much, talk to your spouse about it and enforce the fact that both of you should legitimately be pulling your own weight. Of course, if you intend to call out the father of your child over having never washed a single dish in over five years, be prepared to potentially hear about the pile of clothes by your bed that hasn’t moved since you’ve met. If you’re looking for a solution, start the conversation in the right state of mind.

Also, don’t be all disciplinarian about it. With enough exposure, a chore that used to drive you nuts will become second nature after a few months.

Other factors, such as buying a dishwasher, could turn things around and make your life easier over time. Once everything is settled the first time around, you can let things evolve naturally. 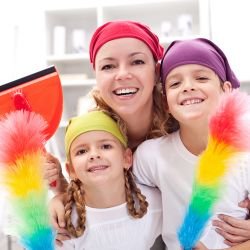 First, make a weekly list of all the chores that need doing in the house’s every nook and cranny. Once that’s done, go through the list with your husband and children, and let everyone choose things they’d prefer doing. Then, share the rest out equally, according to the difficulty and length of each task. (e.g. You can cook if he washes the dishes; you can go grocery shopping if he takes the kids to hockey practice Saturday mornings, etc.)

Other factors must also be considered if you have very young children. Who gets up in the middle of the night to feed your baby? Who changes diapers, gives baths, keeps track of your finances, gets the car fixed, drives your children to daycare and back, drives everyone to out-of-town soccer games, and so on and so forth?

Chore-sharing can go even further than that. Some women told us that because they had to give birth, they asked their husbands to have vasectomies in exchange. That way, they’re in charge of giving birth, while the men in their lives take care of contraception post-pregnancy.

Compromises, little and big, will vary from one couple to another and depend entirely on your specific needs. In any case, it’s important to find common ground to stand on, not just in the interest of fairness, but because you shouldn’t bear everything on your shoulders alone and tire yourself out just to avoid having a conversation.

Your teenager's bedroom is a disaster. You even invented new words to describe this horrendous place where food and clothes seem to blend into a new kind of carpet but your child doesn't seem to mind. What can you do?

Control the chaos in your kids room

Everybody knows how hard it is to keep his bedroom clean. Here are five solutions to make it easier to put everything away.

Storage ideas for the toys

They’re everywhere in your house, you spend your time tripping over them. We are talking about the toys of course! Here are several ideas to help you keep those toys away!