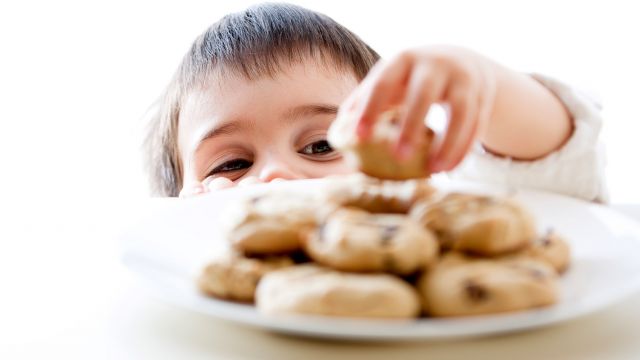 The lure of the forbidden

Forbidden foods include everything the child doesn’t have permission or opportunity to eat. Among them, we often find foods that are high in fat (such as fried foods and chips) or added sugar (such as chocolate and pastries).

Although prohibiting certain foods is usually done for health reasons, the real impact is often the opposite to that expected. By limiting the availability of certain foods, they will only become more attractive! And when the child has the opportunity to eat them, he may over eat these forbidden foods for fear that it’s his last chance to taste them. Taboos stimulate desires ... In offering "treats" from time to time, children will understand that they don’t need to make provisions and that they’ll have other opportunities to eat these foods.

Originally, pizza and hamburgers are made of healthy ingredients. They are indeed prepared with ingredients that come from the four food groups: grain products, vegetables, meats, and cheese.

With industrialization, these foods’ reputation has greatly deteriorated. Grocery stores are now offering very salty and fatty versions of these dishes. When chosen wisely, pizza and hamburgers can easily be integrated into a balanced diet, provided that fat and salt intake is limited. Choose the homemade versions that are rich in vegetables and made of lean meat (lean or extra lean beef and poultry) and go easy on the cheese (high in fat). When possible, choose whole wheat bread or pasta to increase your fiber intake. Remember to finish it all with a few veggies on the side and a glass of milk! 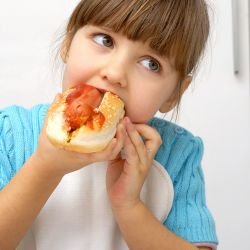 Hot dogs are less popular when it comes to making healthy choices. Indeed, in addition to being high in fat and salt, hotdog sausages contain preservatives that are harmful to your health (such as nitrites). However, this doesn’t mean that they should be banned from your diet! Like all other foods, hot dogs and deli meats can be eaten occasionally. By integrating less nutritious foods in a balanced diet occasionally, children's health will not be compromised.

The same goes for fried (French fries, chips) or breaded (chicken nuggets, fish fillets) foods. Through their preparation process, frying and breading necessarily add fat to food. However, it’s still possible to integrate these foods in your diet by opting for versions that are lower in fat and sodium. Preparing oven-baked fries and potato chips at home will allow you to control the amount of fat and salt added. It is also possible to reproduce the much-appreciated crispiness of fried food by choosing leaner preparation processes.

Any good meal can be comforting when eaten with our loved ones. Nevertheless, there are a few musts while it's still cold outside and we wait for the warm summer weather!

In recent years, the link between diet and health has been scientifically proven, thus the explosion of “medicine-foods”.

Eating shouldn’t be a worry during pregnancy, but there are many types of food that pregnant women should watch out for. Learn how to keep you and your baby safe.