Julia, aged 2, is she too young to learn music? Noah, 5 months old, can he appreciate listening to music?

Even before birth and during his early years, a baby likes to feel, discover and make sounds. The exploration of noises, sounds and music is the foundation of his future communication with his parents and everyone around him. At two years old, he is generally too young to learn music (music theory, rhythmic figures, etc.) but it is a good idea to use every single opportunity to create a special moment with your child in order to build better communication and a parent/child bond. 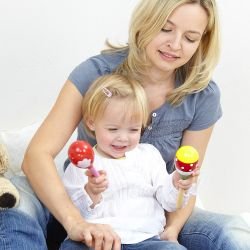 The benefits of music in children

The benefits of incorporating music into the lives of children are many. Musical awakening helps relaxing, listening, it helps motor coordination, intellectual skills and developing verbal, social and affective languages. What else can we ask for?  A child who has been in contact with music, and therefore stimulated by it will find it easier to adapt to his environment when he will begin school because he will have practiced listening, concentrating and using his curiosity.

There’s no need to be a musician, playing Beethoven’s sonatas or singing excessively complex tunes to your children to include music in your relationship. For example, simply hearing the voice of his mother humming a lullaby or his father whispering softly simple sentences and loving words soothes and reassures a baby. The human voice is the most appealing element for a child, even more so than recorded music or elaborated instruments.

The importance of your voice: songs and nursery rhymes

The basic caretaking of a child occupies most of the day so it’s easy to use these moments to introduce nursery rhymes and musical games in his routine. In addition to bringing fun and comfort, these musical moments also serve as benchmarks. Here are some examples of appropriate times to sing to your child:

Let your child guide you. You will quickly understand if the musical activity is too long or too short because it’s based on the interest shown by your child. Choose nursery rhymes that will stimulate his imagination and expand his vocabulary. These songs should also get him thinking, memorizing, using gestures and understanding new concepts. 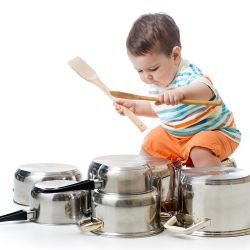 The relevance of sound objects in infancy

Although sound objects and musical instruments are not necessary, especially during the first years of the baby, they still contribute in a beautiful way to his perception and his ability to listen and to express himself. Whether with his body, with found objects, with the sounds of everyday life, with musical toys or with small musical instruments, he participates, in large part, to his own musical awakening.

From birth, a child uses his body as a musical instrument. It makes sounds. At 18 months, he will have learned to clap his hands and will be interested in rhythms. He may also mimic animal sounds, car sounds and sounds of things that he knows. Then, everything is an excuse to play and explore. If your child feels secure, he will happily discover that objects of his surroundings can produce sounds. A small pot, a sheet of paper, a plastic bottle, a wooden spoon, a set of keys… Your little one will use these objects in different ways to discover new sounds that can be drawn. These are his first independent musical explorations. By placing various objects at his disposal, (choose the ones that require a direct contribution), you will allow him to understand causality (I do this, it makes that sound) and to refine his motor skills, among other things.

The adult nearby and in touch with his environment can easily point out day-to-day sounds to his child: the kettle whistling, a zipper sound, the air conditioner turning on, a bird singing outside or the engine of a car passing by. Being curious by nature, the child pays attention to his environment and develops his ability to listen, an essential aspect that will be very useful in his learning experience and in school.

Children may also show great interest for commercial toys but they shouldn’t be the only objects offered in his musical awakening. Among the commercial toys, look for the ones that require mechanical input (by pushing, sliding or shaking for example). To take your pick, balancing is the best choice: some found objects, some commercial musical toys and some musical instruments make a beautiful set. Aim for quality rather than quantity.

Traditional musical instruments can be a fine addition to everything we have mentioned so far. Far from being essential, these instruments provide sounds that are more musical and unusual. The musical instruments of choice are small percussions of a size that can be manipulated by children (bells, maracas, drums, sanded blocks), choose safe ones (avoid objects that are too small) and manageable.

Have fun and enjoy singing and making music with your kids!

To make school sound like fun, why don’t you look for an extracurricular activity? Let’s take a look at activities that focus on arts.

What are the easiest instruments to learn?

Whether you are a child or an adult, learning to play a musical instrument requires an investment of energy, time, discipline and money. Once you decide to go forward, which instrument should you choose?

Use your voice and sing to promote your well-being

Your back, your head, your lungs, your face, your belly… Yes! These are parts of your body and soul that shout HOORAY when you sing.

Do you need talent to learn how to play music?

Talent or passion? Talent or intelligence? Talent or hard work? Is talent inherent or can you develop it? To learn music, play instruments or sing, do you really need to have talent?