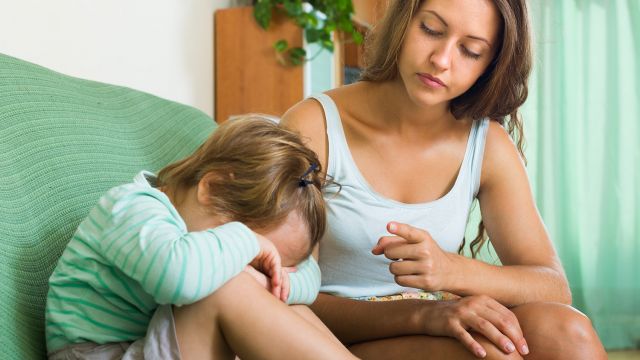 Three-year-old Adam hits his sister or his parents when he's frustrated. Julie and Christian, his parents, tell me that they do not tolerate this behavior and put Adam in a time-out. They wonder if they are reacting properly by punishing him this way.

Five-year-old Lily loves to pick out her clothes, but they're not always to her parents' taste. To Lily, the more vibrant the colors, the better it is! For example, she wants to go to daycare with different colored socks. Her mother Lucy doesn't want to let her leave the house dressed like that. Frustrated, Lily throws a fit and her mother sends her to her room. Lucy and her spouse are wondering how to act in this kind of situation.

Many parents tell me: “I don’t know when to let go and when to react. I feel too permissive”. Others say: “I feel like I’m always on his back. When should we intervene and when  should we let it slide?”

The first thing you need to ask yourself is: is it dangerous if I don’t intervene? Is it dangerous for my child or others, for the environment, for my furniture, etc.? In other words, is my child going to hurt himself, hurt others or break something? When there is a real danger, don’t question yourself and act!

If the answer is “NO”, the situation is not dangerous, then ask yourself this second question: if I don’t react, will this have an effect on his life in 10-20 years? If the answer to that question is “NO”, you should let this behavior slide by. On the other hand, if you can answer “YES” to either one of these questions, you must intervene every time our child behaves in that way.

Let’s look back at Adam’s behavior. Is it dangerous? No. According to his parents, it doesn’t physically hurt them. If Adam was 15 years old, the answer to that question would be different. If the parents don’t intervene, will this have an impact on the child 10-20 years from now? Yes. They won’t have taught their son how to respect others. They should intervene every time Adam acts this way because it is unacceptable. They should help him put into words how he feels “Tell me that you are not happy about leaving the daycare, but don’t hit me”. Adam should also repair his gesture. In another article, I talk about other ways to help your child behave correctly without using punishments. Repairing a gesture, for example, teaches children to be careful with others. 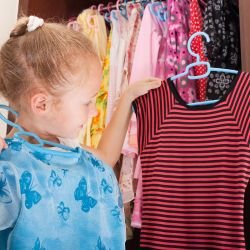 What about Lily, who wants to go to daycare with different colored socks? “Is it dangerous?” No. “Will this have an impact on her life 10-20 years from now?” No. Her parents should let her go out like this, don't say anything, and keep their interventions for more inappropriate behaviors. The less you intervene, the more impact you’ll have on the child when you actually do react. Why is it so hard for Lily's parents to let her go out like this? They are afraid of being judged by other adults that will see their daughter. However, when parents give more importance to other people’s judgment than to their daughter’s fashion tastes, she gets the idea that others are more important than her.

This would be a completely different situation if their daughter was 12 years old and insisted on wearing a low-cut shirt and showing her belly-button. “Is this dangerous?” Yes. “Can this have an impact in 10-20 years from now if I let her dress this way?” Yes. It would mean that they have not taught their daughter self-respect. They should intervene. If they let Lily choose her socks, she feels like she’s the boss of her socks and that’s important to her. She can’t choose about going to daycare, but she can make her decisions. She’ll accept that her parents make other decisions for her, like setting her bedtime for example.

When we act this way, we fulfill the need for independence that our child is craving. A parent once told me that to avoid fighting with her daughter in the morning about the clothes she wants to wear, she lets her daughter wear whatever she wants. However, the daughter has to wear a sticker on her clothes that says: “Today, I chose my clothes myself!” The mother makes her daughter happy and saves herself from other adults' judgment... the type of judgment that could stop our children from having great experiences.

The answer to the two key questions say a lot about the values you want to pass on to your children. For example, if a child never cleans after himself and lets everything lie around the house, is that dangerous? No. Will it have an impact on his life 10-20 years from now? Yes. You will not have taught your child to be organized. If order is a thing you value and wish to pass on to your child, you should intervene every time he doesn’t put his things in order.