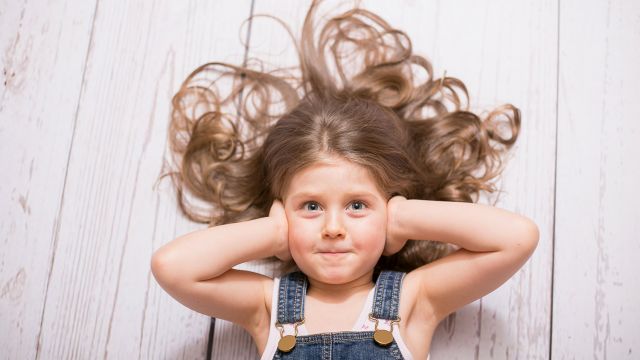 For the past few months, inviting guests or visiting friends has become a nightmare for Tristan’s parents. The latter, aged three, clowns around, rolls over, jumps on the sofa, throws things, screams, runs… He seems to be constantly looking for attention from adults and his parents constantly have to tell him to stop, to reprimand and to take him aside. After a three-minute removal, he starts again, which does not give them much time to enjoy moments with their friends. “We might as well stay home, we cannot enjoy ourselves”, they think.

It may be acceptable for a while to see no one, but it becomes harder sometimes, especially in moments such as the holiday season. Why does Tristan act like that and how should his parents react? A repeated unpleasant behavior gives the child something in return. This behavior is good for him somehow. What does he get from his screams and antics? Attention, for sure. We take care of him when he behaves as such instead of having fun with other adults and that is what he is looking for.

For a child, being seen by his parents and getting their attention is so important that he prefers to have bad attention than none at all. It is easy to leave everything and tell him to stop doing something that is annoying while it is hard to stop everything to congratulate him on doing something exactly the way we asked him to. But if we stopped every 15 minutes just to go see him, touch him, look at what he is doing and tell him a few good words, he would be more cooperative. It is best to stop frequently to give him positive attention than to wait until he does something cheeky to make us take care of him. You will not have to do this all the time, nor for the next 10 years, but for a while it could help.

Getting ready to go out

Before the guests arrive or before going at your friend’s house or in a public place, you could tell your child about your expectations in a more precise way than with a simple “Be nice”. It is way too vague for a child. Instead, tell him “When we arrive at grandma’s house, I expect you to walk in the halls. I also want you to only look at her trinkets with your eyes, but don’t touch!” The words “I expect” should do the trick. Your child gets a message of trust and has no other choice but to comply.

Also, asking what you want instead of what you do not want is much more effective. You could also ask “What are the magic words to say to grandma if you want something?” It is more effective to ask questions than to give them answers and lecture them. They remember their own answers much more than yours. 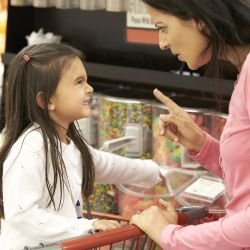 Also tell him that if he screams, throws objects or behaves in a way that disrupts your conversations, you will take him aside, in the public toilets, in your friend’s bathroom or even in the car, without saying a word, until he changes his behavior. Why without saying a word? Because when you tell him “You know, mom (or dad) is not happy at all about that…” you give him attention and that’s what he was looking for. So you reward him. If you take him away every time his behavior starts, he will understand that his behavior is unacceptable. And because you will value his good behaviors, he will increasingly use them.

So take him aside without saying a word because you already told him you would. Only tell him “When you will calm down, we will go back with the others” and wait until you notice the requested behavior. You must be ready to take him aside several times when you will go out next time because he will test your limits. 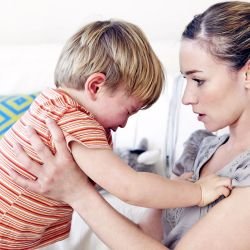 When he will understand that your limit is the same every time he behaves in a socially unacceptable way, he will no longer do so, especially if you frequently highlight the desired behavior. You must be ready to take him aside and maybe even leave the place to make him understand how serious you are.

If you think that your child has enough attention, what could he be looking for? Could he be looking for limits? A “stop” that never moves, like the ones he sees on the streets? It is as if he was wondering how far you would let him go. “When will they stop me?” If you always react the same way and every time, he will know your limit, he will gain nothing by reaching it and his disruptive behavior should gradually disappear.

I also suggest going out soon and having someone babysit your child. Explain that you want to see your friends and have fun, not to punish him but because you need it. Tell him that some time, you will take him with you, but not this time.

Remember that it is in the nature of a child to make his parents happy, as long as his own affective needs are fulfilled. He needs to feel loved, important, valued, free to make some decisions, he needs to have fun with you and he also needs clear, constant and consistent limits.

Being friends with other parents

When children start school, some parents start seeing each other outside of school. Do you feel like you should do that too?

Breaking up with a friend

Do you feel like you are losing a friend? Maybe they stopped calling and you feel them pulling away. The impact of an ending friendship tends to be trivialized by many, but that doesn't make it hurt any less.

Is it true that moms are busy?

Your single friends love telling you how poorly managed your schedule is. Do you have that many things to do?

Sowing the seeds of friendship

For some, sowing the seeds of friendship is easy and happens naturally, but for others, it requires a bit of effort. Here are a few tips to help you support your children.