Brief yet unforgettable, the first smile is the first milestone to develop your child’s sense of humor. It generally appears during the first months of their life. The pleasure of children is triggered afterwards by any stimuli within their reach.

When facing a new stimulation, your baby will first be impassive. They will then smile lightly, emit a few sounds, then they will put their hands in the air and kick into space to express their pleasure. Let’s face it, this is a moment that every parent eagerly awaits.

Naturally, a child will react according to their age and their stage of development. If the stimulation is too simple or too complex they will not necessarily react. For example, guessing games that will amuse preschool kids will not amuse them as much as they get older and “adult” jokes will not make them laugh if they are not old enough to understand.

The unpredictable and unexpected elements always work. From the first peek-a-boo to the most elaborated surprises, kids love it!

Around four years old is when they begin making the difference between reality and imagination, and children stop confusing jokes and lies.

Babies and toddlers first react to a form of humor that involves motor stimuli like gestures and physical actions. This is what Bruno Fortin, psychologist, calls visual humor. The kid will laugh, for example, when they see someone with a clown nose. They will then try to make them laugh too with the same kind of humor. Then, as they grow up, their sense of humor will involve more language and puns. 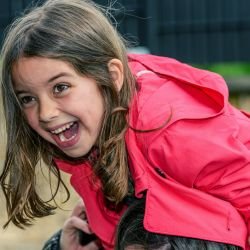 Verbal humor emerges around three years old when the child is amused by playing with simple words and then, around four years old, ridiculous rhymes become what makes them laugh the most. It is the sounds produced by these rhymes (think of rhymes and jingles from your childhood) that make them laugh more than their meaning which will entertain your child only later on.

You will have to wait until the age of six years old for your little clown to repeat adult jokes. And then, watch out! The embarrassing moments will multiply as your child starts school and is exposed to other kids, a lot of people new people and a lot of humor!

Studies show that children in early elementary school try to make people laugh with phonetic riddles or multiple meaning words. At the end of elementary school, their riddles and jokes will become more refined, showing that they have a better understanding of the language.

Several theories dissect the steps in the development of a sense of humor. Here are the highlights.

The first stage characterized by the ability to assign an unusual use to objects appears around the age of two. For example, the child can put a bowl on their father’s head and act like it's a hat.

When words gradually replace gestures and when the child can invent little puns, it means they have reached the second stage: they gradually master the link between words.

At the third stage four or five-year-old children can categorize objects and situations: from now on, they can tell if a situation is unusual or abnormal (a man in a bath wearing his clothes for example). They also begin, between five and seven years old, to appreciate exaggerated jokes.

The fourth stage in developing a sense of humor (around the age of seven years old) introduces the child's ability to transform a situation or an object according to their desires. This is when they begin to impress everyone with their riddles and jokes (or at least try to). 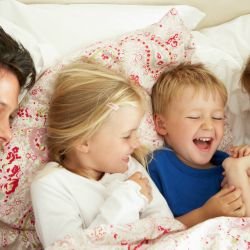 Your child will make you laugh with a more subtle sense of humor from the age of ten. The antics will make way for more elaborated jokes. However, it is also around this age that they will clumsily try to make people laugh with sexual jokes.

Learn to laugh and make laugh

Don’t try to find a way to transform your child into a comedian of the year. According to Thomas Shultz, a psychology teacher at McGill University who studied the sense of humor in children, to facilitate the development of your child’s sense of humor, “play and be happy with them, their sense of humor will come naturally…”.

Early on, babies laugh when their parents laugh, do “funny faces” or tickle them. Of course, parents burst out laughing when they see or hear their child laughing and it encourages the baby to do it again. This is a good way to promote the development of their sense of humor.

No study has shown that watching movies or comedy television series can make children funnier. The children of professional comedians are not necessarily better equipped to develop a great sense of humor, adds Dr. Shultz.

The tickles, the rhymes, the personifications and all the other funny situations are not useless, quite the contrary. Laugh with your family whenever you get the chance, everyone will benefit from it!

Child development from birth to age 5

As a parent, you are proud of your child’s accomplishments, as if their overall success reflects your aptitudes as a parent.

Regardless of their age, music is an integral part of children’s lives. The more they are exposed to it, the better their overall development.