Interventions can be made to induce labour. Some of these methods involve drugs, and others don’t. And these methods are not devoid of risks.

These interventions are most often used when the mother’s health or the child’s well-being is at risk, or when the expected delivery date is long overdue. A foetal heart monitor is used to make sure that everything is under control.

Artificially rupturing the membranes (ARM) means that the doctor makes a small break in the membranes around your baby using either an amniohook (a long thin probe which looks a little like a fine crochet hook) or an amnicot (a medical glove with a pricked end on one of the fingers). This method is not painful when the work is already underway but the amniotic sac is still intact. Breaking it usually speeds up the work.

Inconvenients
Possible uterine infection, increased pain during contractions, potential disruption of blood flow to the baby's head, the cord may pass before the baby's head.

The gel contains the Prostine hormone (prostaglandin), and is used to soften and ripen the cervix. It's a gentle way to stimulate contractions and induce labour within 3 to 5 hours. Commercial name: Prepidil

Inconvenients
Postpartum hemorrhage and tired uterus due to artificial contractions.

Oxytocin is another commonly used hormone that is already produced by the body during childbirth. By artificially increasing the presence of this hormone, the body reacts as if it had produced it itself and starts the process of childbirth. It can also be used to stimulate the natural labour that is judged too slow. It is administered intravenously when the woman is in the delivery room. Commercial name: Pitocin.

Inconvenients
Oxitocin can cause intense contractions and usually generates a rapid delivery.

Other gentle ways to induce labour include: acupuncture, massages, homeopathy, breast stimulation and even sexual intercourse. 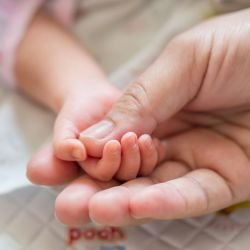 An important Canadian research undertaken partly at McGill University revealed that medically induced labour increases the risks of amniotic fluid embolism (AFE). This type of embolism is a rare and unpredictable complication that remains very dangerous and possibly fatal. Even though its cause is unknown, AFE remains the leading cause of death during labour in developed countries, with a mortality rate of about 7 out of 44 labour-related deaths in Canada between 1997 and 2000. Three million births were examined in Canadian hospitals between 1991 and 2002, and out of the 180 identified cases of AFE, 24 (13 %) were fatal. Women whose labour had been induced had almost double the risk of AFE than other women, with a mortality rate 3.5 times the rate of mothers who did not have an induced labour.

The hypothesis that Pitocin may have a link with autism occurred after the media got wind of a publication in 1998, stating that an increased number of children born with autism were delivered from a Pitocin induced labour. Certain researchers believed that exposition to high rates of oxytocin during birth could increase a child’s predisposition to develop autism, by decreasing the oxytocin receptors in the developing brain.

The Fédération québécoise de l’autisme et des autres troubles envahissants du développement (Federation of autism and of other pervasive developmental disorders) explains on its website (available in French only) the results of a new study clearly stating that no differences were observed between children born from Pitocin-induced labours and children from the control group, not only in terms of autism, but also in terms of children’s general level of IQ. They reject the hypothesis of an association between exposure to exogenous oxytocin and the development of autism. In other words, these researchers clearly reject the hypothesis that an association between an exogenous exposition to oxytocin and the development of autism exists. For further information, you can also visit the Autism Society of Canada.

Placental retention: when the placenta does not come out

Usually, a few minutes after the expulsion of the baby, the placenta comes out spontaneously. Sometimes, the placenta or a piece of it stays inside the uterus. This is called placental retention. How can you recognize this and fix it?

Contractions! Women would love to know what contractions feel like to better prepare themselves and know what to expect. Motherforlife.com will help you solve this mystery.

The “swift birth” hormone: What role can oxytocin play in your pregnancy?

The female hormone oxytocin plays an important role from conception all the way to delivery. It can even influence the bond with your baby and your breastfeeding experience.