Is your child tired of peeing in bed? What if a colourful light could solve his problem for good? 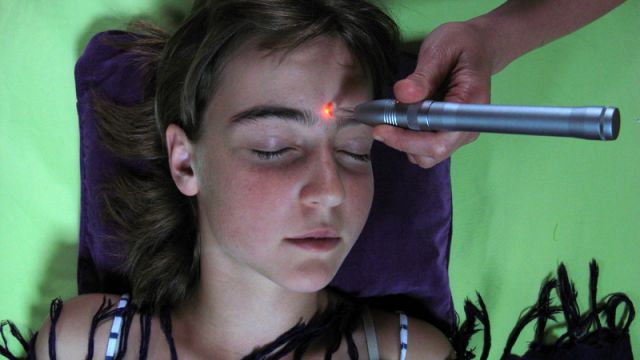 This method is called chromopuncture. It is a blend of chromotherapy and acupuncture, but without the needle!

In Canada, it is estimated that over 500,000 children suffer from nocturnal enuresis. This problem affects twice as many boys than girls.

According to a Sofres-tns-healthcare survey conducted in 2009, 42% of bedwetting children refuse to go sleep at a friend’s place, 37% refuse to go to summer camp, 2 children out of 3 are ashamed of their disease and 64% of them believe that their enuresis is a problem and a burden on their parents. In addition, if the problem lasts, it affects their self-esteem. There are so many reasons to act quickly.

Enuresis is a normal, complete, involuntary and unconscious urination that occurs during sleep in children over 4 years old. There are two types of enuresis: primary enuresis when children have never been clean and secondary enuresis that occurs after a period of at least 6 months of being clean.

According to Chinese medicine, if we exclude physiological causes like diabetes, irritable bladder syndrome, and urinary infections or, in rare cases, a disease that affects the spine, enuresis would be mostly related to fear. This fear includes anxiety, stress, fright, apprehensions, phobias, insecurity due to family background, etc. It could be, for example, divorce, the birth of a little brother or sister, the beginning of kindergarten, very strict parents, etc. Fear depletes the Qi (energy) and lowers the kidney’s Qi. Then, we find nocturnal enuresis in children and urinary incontinence or diarrhoea in adults. Because the kidneys control the upper sphincters, a Qi weakness at this level will cause bedwetting. This is what we will tone with chromopuncture.

Chromopuncture is a therapeutic technique that uses colors to balance the body physically, emotionally and energetically. Since the dawn of time, Egyptians used coloured light to treat diseases and Chineses used it for diagnosis, but the first scientific studies date back to the late 19th century when a Danish doctor named Niels Ryberg Finsen, Nobel Prize in Physiology (Medicine), created (in 1896) an institute for the treatment of tuberculosis with light and color. More recently, a German acupuncturist, Dr. Peter Mandel, developed in Europe, the United States, India and Japan, a system applying coloured light on acupuncture points. This is called chromopuncture. Mr. Fausto Neeresh Pagnamenta, a prominent paediatrician then made this therapy applicable to children.

This method of color therapy and light resembles acupuncture but instead of needles, a light pen equipped with coloured glass rods is used to stimulate the flow of Qi. Coloured light is applied to the skin at specific points, similar to acupuncture points, along the meridians. Each color emits a vibration (frequency) reaching (informing) cells, to rebalance and heal. 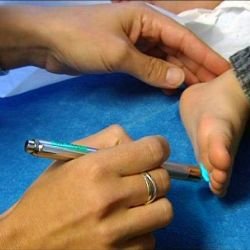 In terms of enuresis, in general, you only need two to four twenty-minutes once a week to see improvement from seven times a week to 1 or even to a complete cure in most cases. Children often have a great time during treatment and ask to come back.

Most importantly, there are no pain or side effects. And children are really happy to finally be healed. You should see them smile when they are told that they can now remove their diaper to sleep.

The latest research in chromotherapy

In 2007, a team led by Scott Campbell and Patricia Murphy of the human chronobiology laboratory at Cornell University has shown that the application of blue light behind the knees helps restore the body's internal clock and eliminate jetlag. The study was published in the "Science" journal.

Even NASA during space flight, noticed that a wound healed more quickly after being exposed, by chance, to a red light. The College of Wisconsin later confirmed the healing power of that color.

Marie-Josée is an acupuncturist who practices at the Centre d’aide spécialisé en stratégies d’apprentissage du Québec (CASSAQ) in Fabreville. She treats children for various problems, including enuresis (bedwetting). Her method lies on a technique called chromopuncture that was developed in Europe by Peter Mandel. This technique does not require needles. Instead, it consists in using colours on various acupuncture points. For more information, you can reach Marie-Josée at 514-892-4834 or by email at mariejoseedufresne@yahoo.ca

Do you know what encopresis is? This problem related to bowel movements affects many families, touching 1.5 % to 7 % of children between the ages of 6 to 12 years old.

When you begin potty training your child with ASD, you must take their structure into consideration because it is different from yours.

The ABC of toilet training

You are about to embark on an important life stage of your little one. Although it is possible for everything to go smoothly, still expect a few surprises on the way to toilet training!

Your child is finally showing signs of being ready to start toilet training! Here is a list of accessories that will help them become big kids!