Piercing your baby’s ears has its share of risk. Caution is the parent of safety and you may want to think twice before proceeding. 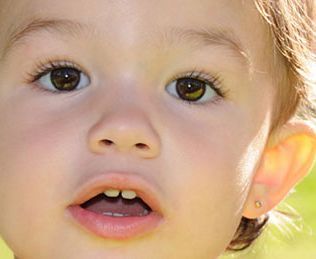 You imagine her, all cute, wearing little hearts or little stars to her ears… But is it too early to pierce the ears of your little angel? In fact, according to a paediatrician, there is a minimum age and an ideal age.

Medically, he recommends to wait until after the two first doses of vaccine, between three and five months old, when babies are immune against tetanus, a disease caused by a bacteria that enters wounds that were cut with dirty objects.

“If you ask me what is the IDEAL age, I think that even if parents really want to, they should wait until their child is mature enough to decide… ” says Dr. Richard Bélanger, paediatrician at the CHUQ and member of the Advisory Committee for Public Education of the Canadian Paediatric Society.

Do newborns and infants suffer less than children and adults when we pierce their ears? No study can answer this question even if babies generally stop crying a few minutes after a piercing that is, after all, not very painful, adds Dr. Bélanger.

Jeweller’s and beauty salons employees use a punch while piercing and tattoo shops use needles. According to Dr. Belanger, the risk of injury is higher with a punch “because we can’t assess the pressure on the ear”.

He suggests to parents to give their child an analgesic before the piercing to slightly ease the pain.

Jewellers and beauticians do not receive any training certifying their ear piercing skills. However, the piercing material suppliers give them advices and warnings, says Sylvie Laroche, beautician at La Clinique esthétique Excellence of Laval. “We also receive information concerning the possible complications”, she says.

She recommends to the parents to wash their child’s ear and apply Polysporin around the earring twice a day for the first two weeks following the piercing. Afterwards, it can be disinfected only once a day.

Dr Richard Bélanger recommends using soap and water for the “post-piercing” cleansing because alcohol and peroxide, without being harmful, slow the process of healing.

On the other hand, even if gold is a high-quality and prestigious mineral, it is more allergenic than surgical steel jewellery. Nickel causes allergic reactions too, “it is important, especially when children are very young, to choose earrings with a screw device or an equivalent. These devices greatly reduce the chocking hazard of fallen earrings”, he says.

Have you started your back to school shopping? We explore this year’s fashion trends to help you find beautiful and comfortable outfits for your kids to wear at school this year!

Christmas is the time to wear nice clothes so here are a few suggestions to give your child a great look for the biggest celebration of the year!

To fully enjoy our harsh winters we need the best accessories! Here are soft and cute accessories to keep your baby and children warm this winter.

Back-to-School is at our doors and we all want our children to look fabulous! Here are the main trends to inspire your shopping adventure!